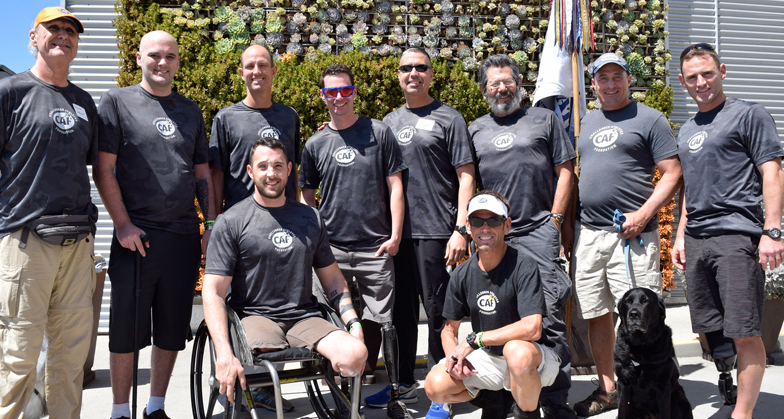 CAF believes that involvement in sports at any level increases self-esteem, encourages independence and enhances quality of life.

While deployed in Iraq in 2004 as part of the National Guard, Anthony Smith was hit by a rocket-propelled grenade. The missile went through his hip and stomach before it exploded, throwing him against a brick wall. Shrapnel took his arm. The enemy fired several rounds at his maimed body. He was put in a body bag before a nurse noticed air bubbles oozing through the blood.

Anthony was in a coma for 62 days, underwent dozens of surgeries and lost his right arm below the elbow. In 2008, Anthony joined CAF’s Operation Rebound program with the goal of competing in triathlon and long-distance cycling. Since that time, he competed in a number of sprint and half-distance triathlons and has twice completed CAFS’ Million Dollar Challenge, a 620-mile bike ride down the California coast.

“Before being introduced to CAF I was 310 lbs. and restricted to an automatic wheelchair,” commented Anthony Smith. “Since then I’ve lost 80lbs., have earned my Black Belt in Taekwondo and have opened my own martial arts studio. CAF’s Operation Rebound has truly changed my life.” Watch CAF Athlete Profile video on Anthony Smith.

Bill Geppert, CAF CEO said, “We at CAF are proud to be at the forefront of changing the lives of veterans and first responders who have physical challenges. Not only have these people risked their lives for their country, now they are elite athletes breaking world records and aiming to compete at the Paralympics. It’s an honor to be selected and recognized as a highly regarded charity giving people the confidence that 80 cents of every dollar donated to CAF directly impacts Challenged Athletes’ lives worldwide.”

Here are some examples Challenged Athletes Foundation helps fulfill its mission through its Operation Rebound program: