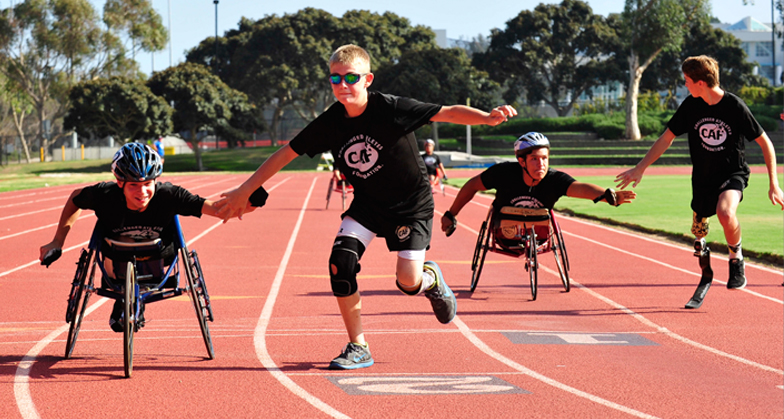 Challenged Athletes Foundation and the sport’s organizing body, USA Paratriathlon, have teamed together to offer the technical training camp August 17-20 for young athletes between 12 and 17 years old from around the U.S. Expert coaches in each discipline of the sport will join with high-profile mentors to provide a unique three-day experience to include training sessions, body mechanic evaluations, equipment training, mentorship, historic education on the sport and, most importantly, provide a fun and social atmosphere for relationship building among the budding young athletes.

The inaugural Challenged Athletes Foundation Youth Paratriathlon Camp was made possible through a grant from The William H. Donner Foundation.

The Challenged Athletes Foundation, founded in San Diego 22 years ago to help individuals with physical challenges get active and involved in sports, provided 12 attendees with financial grants to cover travel and attendance fees. Two of those campers include:

• Ben Baltz – A 14-year-old, 7-year Osteosarcoma survivor from Florida. Ben’s leg was amputated in May 2008 and he used a walking-leg prosthesis until he received his first grant for an Össur Flex Run prosthesis through the Challenged Athletes Foundation – he’s now on his third running foot through the grant program! Ben started participating in kids’ triathlons six years ago and has also played competitive baseball, tennis and is an avid table tennis player. He’s ready to take his participation in Paratriathlon to the next level and is attending the camp to learn new techniques that help him be more competitive and enjoy the sport more.

• Stephen Machak – A 16-year-old from Pompton Plains, New Jersey, Stephen was born with paraplegia, caused by a neuroblastoma tumor which thinned the spinal cord between his T6-T8 vertebrae. He uses a wheelchair, but is a swim and track star on his high school’s teams and competes at a national level in both sports. He’s a 2014 U.S. Paralympics Track & Field High School All-American in the 1500 meter. Stephen is also a starter on the New Jersey Jr. Nets Wheelchair Basketball Team and holds a 4.2 GPA on a 4-point scale. Stephen is looking forward to training with coaches at the highest level and working on his athleticism with all three disciplines one after another.

In 2013 the Challenged Athletes Foundation formed the “CAF Elite Paratriathlon Team” comprised of seven adult physically challenged athletes in preparation for the sport’s inaugural inclusion at the 2016 Rio Paralympic Games.

About Challenged Athletes Foundation
The Challenged Athletes Foundation® (CAF) is a world leader in helping people with physical challenges lead active, healthy lifestyles. CAF believes that participation in physical activity at any level increases self-esteem, encourages independence and enhances quality of life. Since 1994, more than $67 million has been raised and over 11,000 funding requests from people with physical challenges in all 50 states and dozens of countries have been satisfied. Additionally, CAF’s outreach efforts reach another 60,000 individuals each year. Whether it’s a $2,500 grant for a handcycle, helping underwrite a carbon fiber running foot not covered by insurance, or arranging enthusiastic encouragement from a mentor who has triumphed over a similar challenge, CAF’s mission is clear: give opportunities and support to those with the desire to live active, athletic lifestyles. To learn more, visit challengedathletes.org or call 858-866-0959.