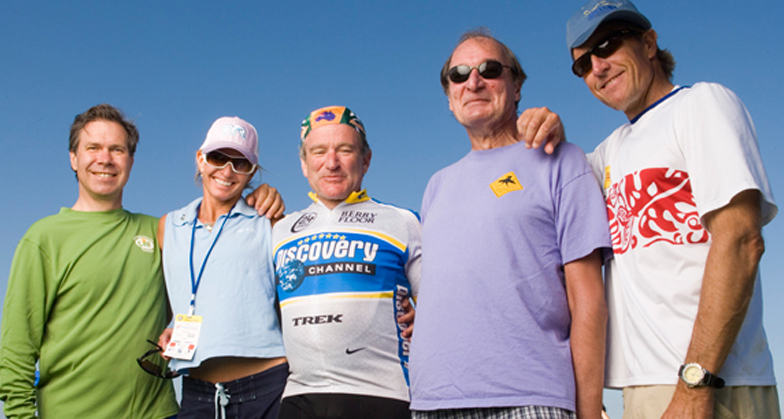 I’ve been thinking about the great ones lately, the leaders in their respective fields whose brilliance was impossible to compare. They were the first and perhaps only. They thrilled us like no other. And like many of Robin Williams’ fans, we’ve been watching his old films, reveling in his performances, laughing, looking for clues to his pain.  In Good Will Hunting, Robin Williams tells Matt Damon’s character that, “you’re a genius, Will. No one denies that. No one could possibly understand the depths of you.” But it was Robin who we could not understand the depths of.

CAF was blessed with the depths of Robin Williams. And every one of the thousands he touched with his wit and humor and unbridled kindness took a piece of him away, their lives now better, lighter, more livable. He particularly loved the kids at the San Diego Triathlon Challenge (SDTC)and though I never saw him angry, when he was hanging with the kids, you dare not interrupt. In Mrs. Doubtfire, Robin loses his patience only once when his wife, in divorcing him tries to keep him from seeing his kids. Perhaps what Robin saw in the physically challenged youth of the world were pure souls wondering why they had been dealt a tough blow, wondering why they couldn’t be free and happy like the other kids. Perhaps he saw himself.

And the kids loved him back.

Robin’s passing brought people together like the formation of some impromptu peleton.  It was that tragic catalyst that reminded us of our human frailties and the need to hold out a hand to the imperfect and the ill and anxious. It reminded us that he was a friend of CAF not because he had the chance to ride his bike with some of his pals or spend a few days in La Jolla. No, I think Robin Williams was a friend to CAF because he felt they are that big hand offering to make things a little better for the imperfect.

In the 1998 film, Patch Adams, Williams plays a med student who suggests that “our job is improving the quality of life, not just delaying death.” He did that job well.