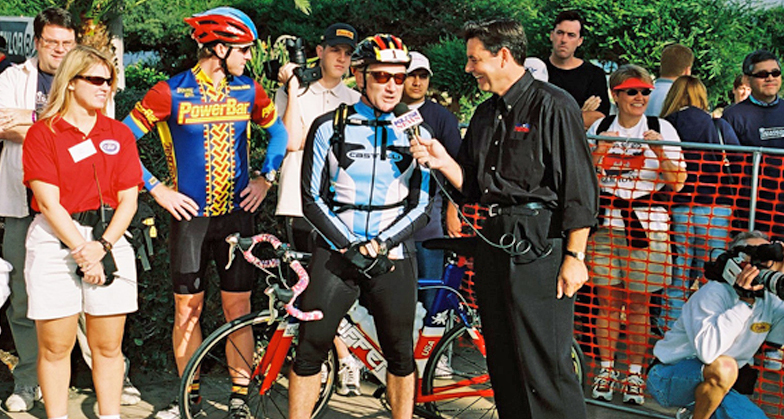 At CAF, I think we have a unique view of the person Robin Williams was and will always continue to be in our hearts and minds. For me, it was a personally unique experience because I was the person who would oversee his event day activities and navigate him from location to location. Sounds easy, but I can tell you I was whoa-fully unprepared.

You see, prior to the 1998 that brought Robin to ourSan Diego Triathlon Challenge (SDTC), we were a small event at the La Jolla Cove”¦ we attracted about 250 athletes”¦ we would introduce our 20 or so challenges athletes and off everyone went”¦ and we would wait until the end of the day for them to come back to have our awards barbecue. Back in the day, we were all volunteers. This was an easy job. But that year”¦ 1998″¦ That year changed everything.

Virginia Tinley, CAF’s Executive Director, had informed me Robin was coming to SDTC and asked me to be his liaison for the day. Why would I reject that job! His “people” gave me very simple instructions. “You cannot promote his appearance, you will need to see if he is “in the mood” to talk to media before his ride, after his ride I’m sure he will talk to all.” Okay, sounds simple”¦ event day came, the crowd saw Robin”¦ the crowd went crazy”¦ all of a sudden, this “A” list celebrity was taking the time from his life to come to this tiny event at the La Jolla Cove to see what was happening.

As I went in to “Over drive” to shield him from the crowds he did the opposite. He went to the crowds, jumped on laps, dove into Improv, learned athletes names, listened to their stories”¦ over the years I learned the “Look”, that look that said “this is okay”. This is what I want to be doing right now. Eventually I learned when he needed a break and when he wanted more. Most often, he wanted more. He looked forward to these faces, to athletes he would see every year. He remembered them, and wanted to hear the updates. He always said, “This is like coming home to family. Like a reunion.”

He especially loved the energy he got from the athletes, their excitement of being there and the attention he bestowed on them. The thing that resonates the most is he never wanted anything in return. In fact he did not want us to actively promote his appearance. He had no agenda”¦ I think for him it was the best of both worlds. He loved the fantasy camp idea of riding with his heroes'”¦ Scott Tinley, Wendy Ingrahm and so many more. And then hanging with his other heroes, such as our athletes in Operation Rebound. Through Robin’s annual trek to the San Diego Triathlon other Celeb’s wanted to check it out.

The year was 2003″¦ just Before Will Ferrell did Elf. Their trainer, Gary Kobat, brought Will, Jim Carrey and David James Elliot to the event. Now mind you, at this point Robin and I had a routine”¦ but add three more “A listers” in that recipe and things became a bit chaotic! I will never forget Robin’s attorney, Jerry Margolis, look at me at the end of the day and say “Tabi, I think you’re one celebrity short of a nervous breakdown”. He was so right”¦.

In the end, it was Robin’s genuine loyalty that put a stamp of credibility on CAF. Before he came, people really didn’t know what we were doing”¦ he let others know that it was important. That riding a bike at any ability was important. Being able to get outside and be great was important. And every person regardless of their ability deserved that right. The word’s that will forever ring in my head are very simple”¦ at the end of each day, each year, I always said the same thing”¦ “Thank you Robin for being here, it means so much to our athletes,” his response, “No it is I who thank you. It means more to me than it does to them”.