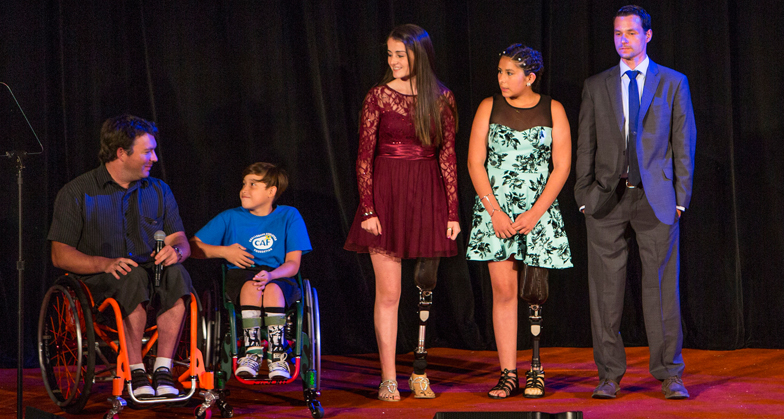 Unique Relationship Between Mentors and Mentees to be Showcased Throughout the Evening
San Diego, CA – June 7, 2016

The 10th anniversary of A Celebration of Heroes, Heart and Hope Gala, taking place on June 8th, 2016 at the Waldorf Astoria New York, will celebrate ‘A Decade of Difference.’ Thanks to the founder, Chairman and this year’s honoree, Scott Stackman and the generous support of the New York community, over the past nine years, more than $11.2 million have been raised at the gala to help thousands of challenged athletes around the world have opportunity to get back into the game of life through physical fitness and athletics.

This year’s gala will feature the theme of mentorship throughout the evening’s program. The unique relationship between mentors and mentees is often the game changer for the success of an individual with physical challenges. It takes time, support, belief and more often than not, a mentor to show an individual the way, so they can be lifted from the sidelines. CAF helps link young and newly injured athletes with experienced mentors to help them reach their full potential in sports and in life.

Throughout the evening’s program, the audience will be captivated by three exemplary pairs of mentors and mentees, who demonstrate the unselfishness and willingness of a mentor to empower a fellow challenged athlete to realize their full potential and achieve their goals.

Nine-year-old Kumaka Jensen, who has spina bifida, found a role model and mentor in Christiaan Bailey. Jensen was four when he was introduced to Bailey, and since then they have developed a great relationship that has blossomed over the years. Bailey was a professional skateboarder and surfer, and after a skateboard crash, became paralyzed from the waist down. He is now a leader in the sport of wheelchair motocross (WCMX) and has positively influenced Jensen by showing him how to push the bounds of possibilities, challenge his own mindset and preconceptions. Young Jensen has set a goal to be able to do a backflip on his wheelchair by the age of 10.

Alex Henry was diagnosed with Osteosarcoma, a form of cancer, when she was 12. After going through 10 months of chemo, she made the decision to have her leg amputated. Despite not fully comprehending what the future would hold for her, when she met Breezy Bochenek, another fellow amputee of the same age who lost her leg to the same disease, she quickly realized the possibilities of leading an active lifestyle. After Breezy lost her leg, instead of losing hope, she decided to take advantage of what she could do and not take life for granted.

“I wasn’t really sure how everything was going to turn out, but when I met Breezy, I felt more stable,” remarked Alex Henry. “Being able to meet someone like me who has been through it has been amazing.”

Riley lost both his legs above the knee and three fingers from stepping on an IED while deployed in Afghanistan. This past winter, Daniel went to surf the world’s most notorious wave, Pipeline in Hawaii, and can be found skiing on the slopes in Colorado.

“Operation Rebound athletes are a great community to push me in trying new things, getting better and trying new sports,” said Daniel Riley. “There’s nothing better than a bunch of Marines pushing you to go faster, harder and to go further. Hopefully, my actions of being out there and living my life not only benefit me but benefits some other guy coming up behind me.”

For more information, to purchase tickets or to make a donation, please visit heroesheartandhope.com. Visit challengedathletes.org to learn more about how to support the organization through unique fundraising and sponsorship opportunities.

Experience A Celebration of Heroes, Heart and Hope gala by watching the video highlight of CAF galas in 2015- https://youtu.be/3MTgfatALj8

The Challenged Athletes Foundation® (CAF) is a world leader in helping people with physical challenges lead active, healthy lifestyles. CAF believes that participation in physical activity at any level increases self-esteem, encourages independence and enhances quality of life. Since 1994, more than $73 million has been raised and over 13,000 funding requests from people with physical challenges in all 50 states and dozens of countries have been satisfied. Additionally, CAF’s outreach efforts reach another 60,000 individuals each year. Whether it’s a $2,500 grant for a handcycle, helping underwrite a carbon fiber running foot not covered by insurance, or arranging enthusiastic encouragement from a mentor who has triumphed over a similar challenge, CAF’s mission is clear: give opportunities and support to those with the desire to live active, athletic lifestyles To learn more, visit challengedathletes.org or call 858- 866-0959.