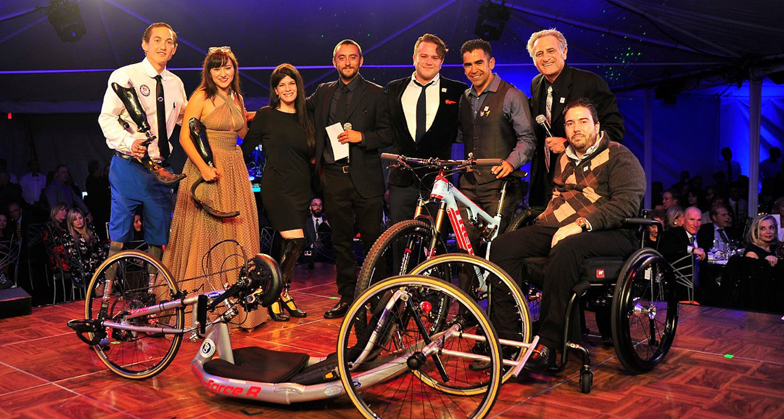 SAN DIEGO, CALIF. (March 10, 2015) – It was an uplifting and transformational evening as nearly 500 guests came together to help raise more than $3 million for the Challenged Athletes Foundation® at A Celebration of Will, A CAF Gala to Honor the Legacy of Robin Williams. The inaugural West Coast CAF Gala was held on Saturday, March 7 at Rancho Valencia Resort & Spa, the #1 rated resort in the U.S. by U.S. News & World Report.

Each dollar raised was matched by an anonymous donor and placed in the Challenged Athletes Foundation Endowment in Memory of Robin Williams, which will fund grants for adaptive sports equipment, training and competition expenses to challenged athletes for years to come.

“Robin Williams was instrumental in the growth of the Challenged Athletes Foundation’s mission, and he participated in many of the organization’s events over 11 years – he always said it was like coming back to family,” says Jeff Jacobs, CAF board member and co-owner of Rancho Valencia. “We, as family, feel the depths of his absence but celebrate the legacy he has created through the establishment of an endowment fund, enabling us to lift the burden for others and carry on his commitment to challenged athletes.”

-Kyla Winters, who lost fingers and both of her legs to meningitis in 2009, received Össur running feet
-Juan Carlos Vinolo, paralyzed after tragically being hit by a car head-on while riding his bike on Fiesta Island, received a new handcycle
-Juan Carlos Hernandez, who lost his right leg after a rocket-propelled grenade hit his helicopter while on tour in Afghanistan, received a new mountain bike

Also among highlights of the Gala were dance performances by Amy Purdy, CAF athlete from Dancing with the Stars; a live auction; world-class entertainment; and a moving tribute to the film and comedic career of Robin Williams. Attendees also had the opportunity to personally interact with challenged athletes and experience firsthand how their generosity truly changes lives.

About the Challenged Athletes Foundation
The Challenged Athletes Foundation® (CAF) is a world leader in helping people with physical challenges lead active, healthy lifestyles. CAF believes that participation in physical activity at any level increases self-esteem, encourages independence and enhances quality of life. Since 1994, more than $60 million has been raised and over 9,500 funding requests from people with physical challenges in all 50 states and dozens of countries have been satisfied. Additionally, CAF’s outreach efforts reach another 60,000 individuals each year. Whether it’s a $2,500 grant for a handcycle, helping underwrite a carbon fiber running foot not covered by insurance, or arranging enthusiastic encouragement from a mentor who has triumphed over a similar challenge, CAF’s mission is clear: give opportunities and support to those with the desire to live active, athletic lifestyles. To learn more, visit challengedathletes.org or call 858-866-0959.

About Rancho Valencia Resort & Spa
In February 2015, U.S. News & World Report named Rancho Valencia the #1 resort in the U.S. and the #1 Relais & Châteaux hotel in the world. Rancho Valencia has garnered a reputation as one of the world’s most sought after luxury resorts. Spanning 45 lush acres of gardens, trails, olive groves, casitas and more, this Mediterranean inspired, all-suite property offers the finest accommodations, service and programming that San Diego has to offer. Among the property’s offerings are 49 luxuriously appointed guest casitas with private patios, a three-bedroom Hacienda with a private pool and backyard, a world-class spa, fine dining restaurant and award-winning tennis program, as well as 12 residential villas. In late 2011, Rancho Valencia closed its doors to undergo a massive $30 million property-wide renovation which comprised of major updates including two new restaurants and a bar, Veladora and The Pony Room, an expanded fitness center, addition of the Serenity Yoga Pavilion, wine room, and a complete re-design of the 49 guest casitas and private three-bedroom Hacienda. Also included in the revitalization was the introduction of a brand new spa treatment menu and an enhanced range of more than 95 complimentary fitness classes offered per week. With the help of the renovation, Rancho Valencia has recently earned additional numerous awards this past year including Forbes Travel Guide Five-Star Award, AAA Five Diamond Award, Condé Nast Traveler 2015 Gold List and Condé Nast Traveler’s 2014 Readers’ Choice Awards as #1 in Best Resorts in Southern California, and #25 in the top 100 resorts in the world. For more information, please visit www.ranchovalencia.com or call 800-548-3664.