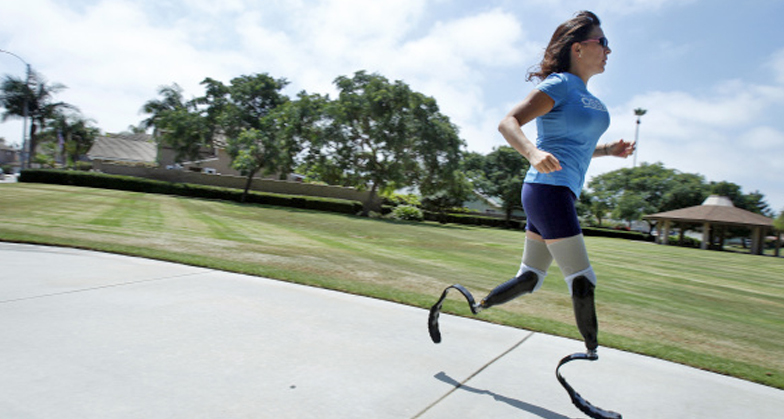 Marseilles has been an Ambassador for the Challenged Athletes Foundation® (CAF) for the past 15 years. She currently teaches kindergarten children at Eisenhower Elementary School in the Garden Grove School District in Orange County, CA. Marseilles had her frostbitten legs amputated after being stranded with a friend on a drive home from ski trip in New Mexico. She and her friend survived 10 days in the snow on a solitary back road in Arizona before a man and his son found them by chance on their snow mobiles.

After gradually improving her health and learning to walk on her prosthetics, Marseilles watched the 1996 Paralympic Games for the first time — and decided she wanted to run. She soon began to compete and train with proper running prosthetics, which culminated in her successful finish at the Chicago Marathon. Jami has received multiple competition and travel grants from CAF to participate in competitive athletics. True to its mission, CAF supports people with physical challenges so they can pursue an active lifestyle through physical fitness. CAF believes that involvement in sports at any level increases self-esteem, encourages independence and enhances quality of life. In addition to competing in this year’s race, Marseilles has taken to mentoring Boston Marathon bombing survivors Celeste Corcoran, Patrick Downes & Jessica Kensky- Downes.

Another Challenged Athlete, Patrick Downes, will join Marseilles as he sets out to run his first Boston Marathon on a running prosthetic. Patrick and his wife Jessica hand-cycled the 2014 Boston Marathon one year after the attacks and Patrick did it again in 2015. He also ran a marathon in 2005 as an able-bodied person while studying at Boston College. Downes life changed nearly three years ago when he and his new wife, Jessica Kensky, were watching the Boston Marathon and were caught in one of the bombs’ blast radius by the finish line. Jessica, a registered nurse, didn’t even recognize the damage she sustained as she rushed to help Patrick. Despite the couple receiving swift medical attention, each sustained serious injuries that resulted in leg amputations. The entire country was captivated by their love and dedication to one another after this tragic event.

A few weeks after the Boston Marathon Bombings, Patrick and Jessica were invited to CAF’s A Celebration of Heroes Heart and Hope Gala in New York City, which honored the Heroes of Boston. They experienced a transformational moment as they got to meet dozens of challenged athletes who shared their stories of overcoming challenges and pursuing active lifestyles through sports. Later that year, the couple traveled to Southern California to attend CAF’s Aspen Medical Products San Diego Triathlon Challenge. Back home in Boston, they attended an Össur Running and Mobility Clinic, presented by CAF to help them better adapt to their new prosthetics and gain the opportunity to be active like the other individuals they met along the way.

CAF currently has 10 Challenged Athletes running in this year’s Boston Marathon, including seven who have received travel grants to compete in the race. There are a total of 23 Challenged Athletes in Massachusetts receiving CAF grants to compete in all sports. Fifty of CAF’s top supporters will either be running in the Boston Marathon or cheering from alongside the race route.

The Challenged Athletes Foundation® (CAF) is a world leader in helping people with physical challenges lead active, healthy lifestyles. CAF believes that participation in physical activity at any level increases self-esteem, encourages independence and enhances quality of life. Since 1994, more than $70 million has been raised and over 11,000 funding requests from people with physical challenges in all 50 states and dozens of countries have been satisfied. Additionally, CAF’s outreach efforts reach another 60,000 individuals each year. Whether it’s a $2,500 grant for a handcycle, helping underwrite a carbon fiber running foot not covered by insurance, or arranging enthusiastic encouragement from a mentor who has triumphed over a similar challenge, CAF’s mission is clear: give opportunities and support to those with the desire to live active, athletic lifestyles To learn more, visit challengedathletes.org or call 858- 866-0959.
## #