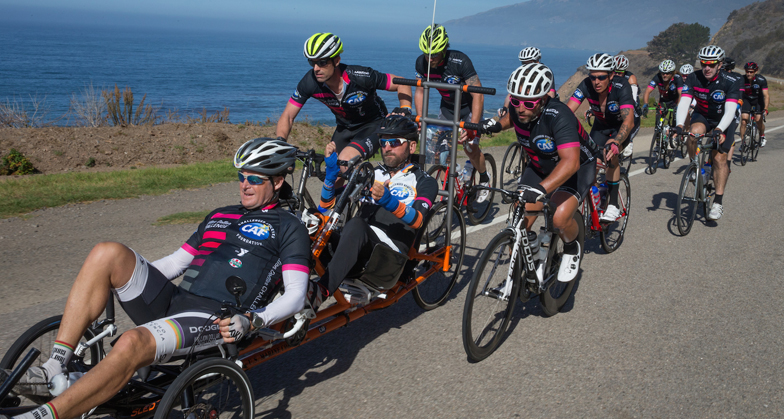 SAN DIEGO – AUGUST 26, 2015 – Building off a successful partnership since 2011, the Mazda Foundation (USA), Inc. will return as the title sponsor of the 10th Anniversary Million Dollar Challenge, the Challenged Athletes Foundation’s signature seven-day cycle event in California to raise $1 million (or more) to support the nonprofit organization’s mission of empowering people with physical challenges to live active lifestyles through fitness and sports.

With the Challenged Athletes Foundation’s reach into the able-bodied and challenged athlete cycling communities, coupled with the resources the Mazda Foundation brings to the event through its stellar brand recognition and financial support, the Mazda Foundation Million Dollar Challenge is one of the premier cycling events in the U.S.

“Support from the Mazda Foundation has helped the Million Dollar Challenge become more than a ride of a lifetime, but an event where individuals can use their passion for cycling to make a difference in the lives of others,” said Bill Geppert, interim CEO of the Challenged Athletes Foundation. “Our partnership with the Mazda Foundation has been mutually successful because our missions are so closely aligned around the goal of helping others  – those with able bodies and those with physical challenges – realize their aspirations and dreams.”

The 10th anniversary Mazda Foundation Million Dollar Challenge will kick-off Saturday, Oct. 10, 2015, in San Francisco with more than 125 cyclists, including celebrities, professional athletes and 15 athletes with physical challenges. Together, the group will embark on the seven-day, 620-mile ride down the scenic yet demanding California coastline and ending on Oct. 16 at La Jolla Shores beach in San Diego. Each participant of this sold-out event has pledged to raise $12,500 or more to benefit the Challenged Athletes Foundation, which will support the organization’s mission to support physically challenged athletes around the world by funding grants for adaptive sports equipment, training and competition expenses, and mentoring programs and sports clinics across the U.S.

“The 10th anniversary of the Million Dollar Challenge is a benchmark achievement and testament to the impact the event has on its participants, and the impact the Challenged Athletes Foundation has on the adaptive sports industry as a whole,” said Mazda Foundation program director Tamara Mlynarczyk. “The dedication of each cyclist to raise awareness and support for the organization is truly commendable, and we’re proud to be a part of the team. We know the event will exceed the $1 million fundraising goal and hopefully even the $1.24 million that was raised in 2014.”

Since 2011, the Mazda Foundation has continued to increase its support of the Challenged Athletes Foundation through expanding funding support to the Operation Rebound program that helps military personnel, veterans and first responders with physical challenges use sports and physical fitness to re-integrate into society and lead active and fulfilling lives.   Featured challenged athletes participating in the 2015 Mazda Foundation Million Dollar Challenge include:

• Lance Weir, Carlsbad, CA: Marine Corps Reservist Weir endured a canoe accident in his early 20s that left him a quadriplegic with minimal sensation in his arms and hands. Weir is aiming to earn a spot on the U.S. Paralympic Air Rifle team for the 2016 Paralympic Games in Rio de Janeiro. This year, he will ride on a recumbent tandem hand cycle with a partner.

• Karen Aydelott, San Luis Obispo, CA: Struck from behind by a motorist while on a training ride in 2006, Aydelott became a below-the-knee amputee at 62 years old. Now 69, Aydelott has completed numerous half and full Ironmans, oftentimes winning her age group as a physically challenged athlete. Her goal is to complete the Hawaii Ironman World Championships.

• Shelby Madden, San Diego, CA: Born with a rare bone condition, Spondylometaphyseal dysplasia (SMD-K), Madden has been active in many sports including skiing, snowboarding, skydiving, triathlon and cycling. After several total hip and knee replacement surgeries, she looks forward to once again riding down the California coast in order to raise awareness and funds for other challenged athletes who want to engage in the active, healthy lifestyles.

• Mark Barr, Houston, TX: At 14 years old, Barr became an above-the-knee amputee due to a rare form of bone cancer in his right leg. He made the 2004 and 2008 U.S. Paralympic Swim Team and transitioned into triathlon in 2010. Barr has five Paratriathlon National Championship titles and a bronze ITU Paratriathlon World Championship medal to his name. He is aiming to qualify for the 2016 Paralympic Games in Rio de Janeiro, where Paratriathlon will makes its debut.

About Challenged Athletes Foundation
The Challenged Athletes Foundation® (CAF) is a world leader in helping people with physical challenges lead active, healthy lifestyles.  CAF believes that participation in physical activity at any level increases self-esteem, encourages independence and enhances quality of life.  Since 1994, more than $67 million has been raised and over 11,000 funding requests from people with physical challenges in all 50 states and dozens of countries have been satisfied. Additionally, CAF’s outreach efforts reach another 60,000 individuals each year. Whether it’s a $2,500 grant for a handcycle, helping underwrite a carbon fiber running foot not covered by insurance, or arranging enthusiastic encouragement from a mentor who has triumphed over a similar challenge, CAF’s mission is clear: give opportunities and support to those with the desire to live active, athletic lifestyles. To learn more, visit challengedathletes.org or call 858-866-0959.

About Mazda Foundation
Through the Mazda Foundation, Mazda and its employees are working together to proactively help our neighbors – and the communities where we live and work – to build a better, brighter future. With contributions exceeding $8 million since its founding in 1992, the Mazda Foundation is playing a meaningful role in helping thousands of Americans realize their aspirations and dreams. It’s also important to note that programs the Mazda Foundation supports range from children’s organizations and educational scholarships to food banks, environmental programs and crucial disaster relief efforts. To lean more, visit Mazdafoundation.org.