Sarah Reinertsen was the first female amputee to cross the finish line at IRONMAN. She’s walked the earth during her time on the T.V. show, The Amazing Race. But the World Marathon Challenge (WMC) was by far the toughest of races to cross off her bucket list.Sarah kicked off 2018 with the incredible accomplishment of completing the World Marathon Challenge. She ran 7 half-marathons, on all 7 continents, in 7 days, to raise money and awareness for the Challenged Athletes Foundation (CAF). Every race was organized by locals, day or night, and participants had about 12 hours in each location, including running time.

Two years ago, CAF board member David Samson had the bold idea to gather a group of people from the many seasons and passions in his life to participate in the World Marathon Challenge, all to support meaningful causes. As an athlete in his own right, a Kona IRONMAN finisher, David assembled a team of 16 athletes to compete as “Team Hold the Plane” and he asked Sarah to represent CAF. She was all in. 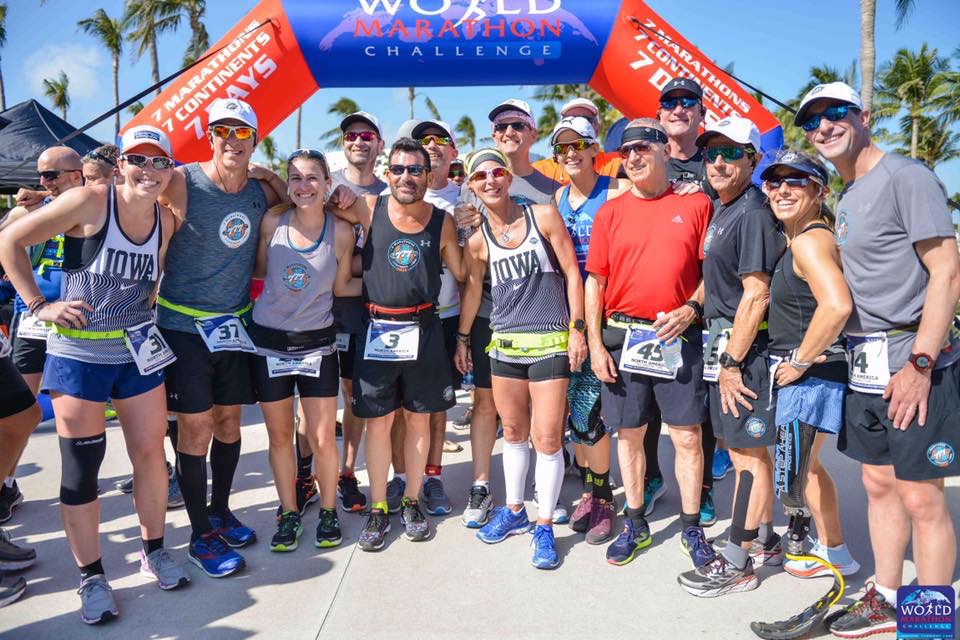 As Sarah shared her excitement about the race at CAF’s Heroes, Heart and Hope gala in New York, long time CAF supporter and former honoree, Martin Franklin, as well as donor Gareth Evans were both inspired to take on the challenge themselves.

Signing up was the first step for Sarah and the 50 brave participants. Each country would come with its unique set of rewards and challenges to make up an unforgettable seven-day adventure around the world. 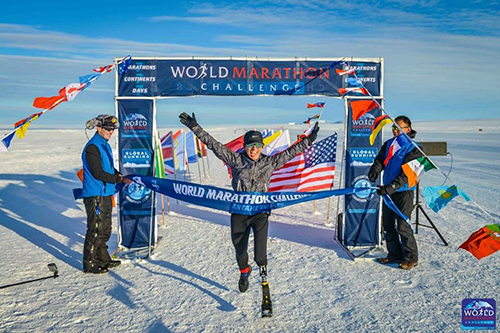 “This first race was a game changer for me. I underestimated how hard it would be to run on ice; there was no solid ground, just ice on ice, so every part of my body was working harder from the ground up. It took all of my effort just to stay upright and I ended up falling three times throughout the course, which was essentially laps around the airport runway. I was worried that I would spend all of my energy in this race and have nothing left for the rest of the week so I chose from this moment to do half marathons in every destination and keep things consistent. My mental toughness game came in strong during this race. I had given out “Sarah Bears” at the recent SDTC run clinic and one of the kids named Logan reached out saying he was giving his bear an extra hug every night during my race. I thought about Logan and knew I couldn’t let down my Team CAF crew and that kept me running.” 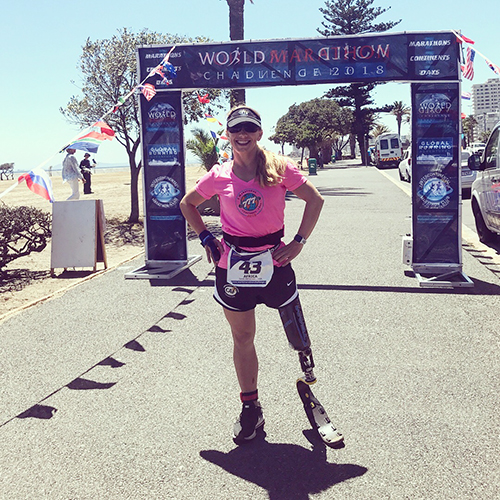 “While it was only a five-hour flight, the transition from Antarctica to South Africa was like going from the freezer to the oven. We ran during the heat of the day through this colorful, beautiful town and I tried to run as close to the ocean wall as possible in hopes of catching a mist from the water. One of the volunteers was a fan of the Amazing Race and we connected briefly that day. It reminded me about that experience and my former “travel training,” giving me a confidence boost that I could do this.” 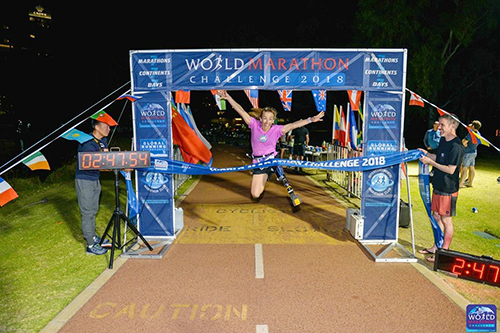 “This was the first night race and the first one I started playing music; my playlist of course kicking off with, “Do you come from a land down under?”. Australian Paralympian and Olympian Michellie Jones is my coach and her voice and spirit were in my head and kept me strong. I felt infused by the humor and happiness of the country, and I jumped across the finish line. It was my favorite finish and brought the playful tone back to the race. Despite the physical suffering, I found my groove down under.” 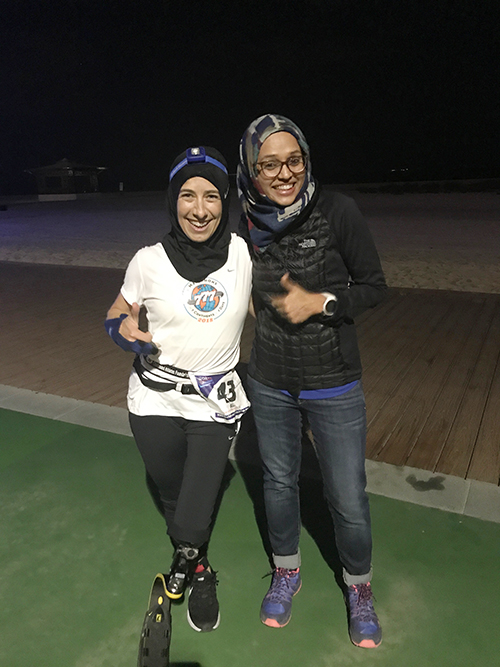 “This was a long 10-hour flight. It’s ironic being excited for a long flight but these were great for rest and recovery; especially when the plane is stocked with Gatorade and athlete food. We started running at 10pm. 10 loops made up the course along the beach during an electric Friday night in the city. I planned to run in the traditional Hijab because I wanted to reflect the women that live there (both with and without disabilities) so they could see themselves in me and feel empowered in their own lives. I ended up meeting a local volunteer that was also wearing a hijab. She happens to run an all-women’s workout group and is trying to get more women active. This positive cultural exchange made for an unforgettable race in Dubai.” 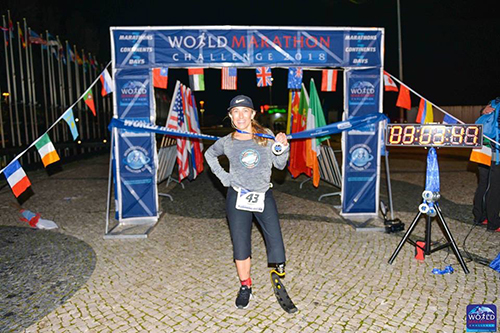 “This race and stop was the toughest. The weather was cold and rainy and the course terrain consisted of slick tile cobblestones and algae-covered wooden plank docks. The whole thing felt treacherous. It was a low point, I cried and thought about quitting. But my music helped distract me, I slowed down and came back to positivity.” 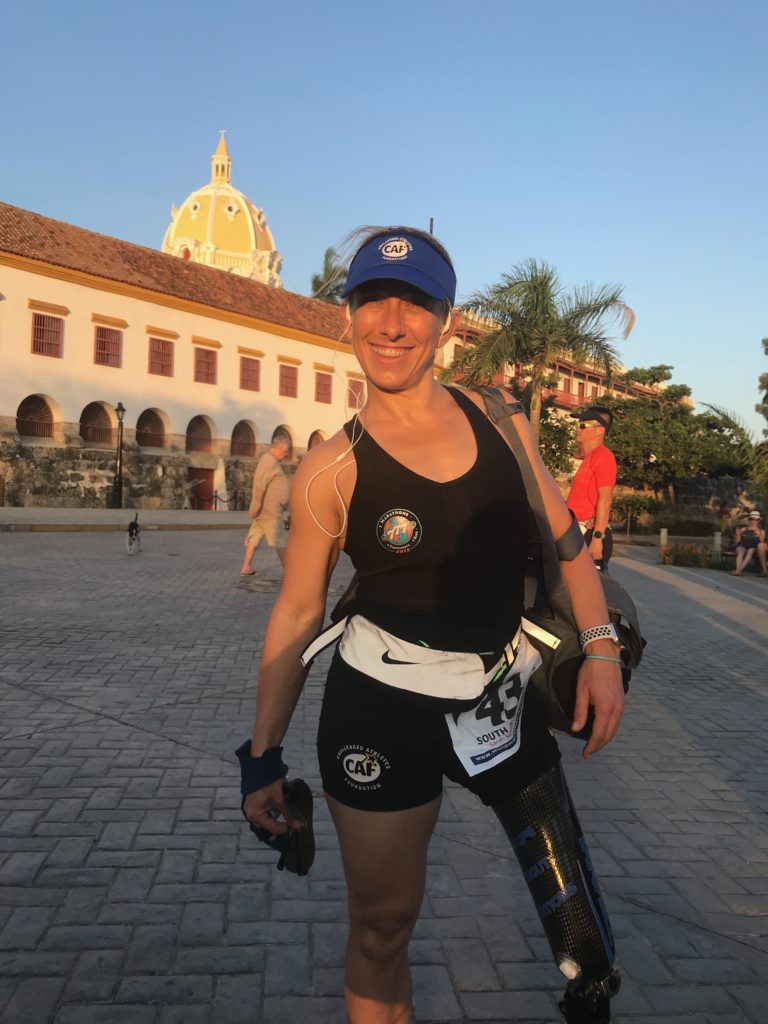 “We landed in Cartegena to a 93-degree day, although luckily, we ran later in the afternoon. This race had its challenges as the course was mixed into the city; people were trying to get home from work and we were trying to run a race on the uneven sidewalks and streets. It took a lot of attention to avoid potholes and people. I was worried about getting lost and didn’t feel particularly safe which actually motivated me to run quicker and stay with the larger crew. There were horse and carriages carting tourists around and it’s the only time I can say I outran a horse. I felt a lift in spirts as we closed in on the end of the journey.” 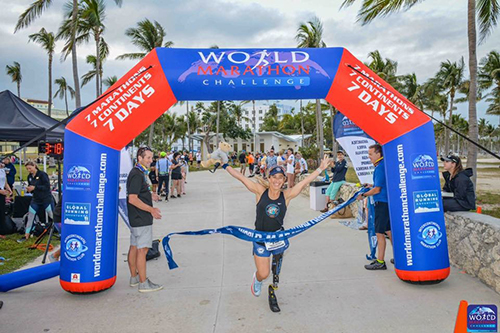 “There was so much support for “Team Hold the Plane” at our last race, including my whole family. We ran up and down the boardwalk in South Beach and I went out with the fastest race of the week. I crossed the finish line holding Sarah Bear, a symbol that this race was completed for CAF and the CAF kids ready to push past their own limitations.”

“This was the most challenging race I’ve completed, by far. IRONMAN is done in 17 hours; 7 days is a lot of time to keep it together mentally and physically. I feel proud that I finished half marathons in every continent and will leave the challenge of full marathons to the next generation! I wore a lifetime of CAF shirts in one week and was grateful to share the mission around the world. And I couldn’t have survived without bumble bee tuna and crackers!”

In taking on a seemingly impossible challenge, Sarah served as a firsthand example to people throughout the world that anything is possible. To witness her running through the streets of Lisbon and along the seawall of Cape Town, leaves a lasting imprint that transcends cultural differences and carries over to the next generation of challenged athletes.To hear more about Sarah’s experience, listen to Bob Babbitt’s interview with her:http://babbittville.com/sarah-reinertsen-2018/