In 2000 we decided as a company that we wanted to do something to give back, to share our success with an organization that we believed in. Doug Johnson, one of the principles in the company, knew and had introduced me to Bobbie Babbit and he also knew Jim McClaren, as they had both gone to Yale. We did a bit of checking, and quickly Dan and I agreed that CAF would be the kind of organization that we wanted to support. That first year we offered to help in any way that we could. We were told that CAF needed help physically setting up the triathlon. So, Aspen loaded up a bus and brought all 35 of our employees down to set up the course and the staging areas.

Being at the event was so uplifting for all of us that we knew right away that we wanted to continue to be involved. Each year Aspen grew and we came down with more and more people. We started renting rooms at the Colonial and putting everyone up for the weekend so it was a bit of a celebration for all of us as well. I remember one year, when Aspen was having a dinner on Friday night, Emmanuel Eboa arrived from Ghana and Nancy Reynold (from CAF), I think, brought him over right from the airport to have dinner with us! That started a long-term friendship with Emmanuel, who at one point stayed with an Aspen employee before his family was able to move to the US to join him. I have a large painting of him on the wall in my office to this day.

Over time, we signed up to become a sponsor of the Triathlon. I remember that to become a silver lever sponsor, we needed to make a 3-year commitment, which was tough because we weren’t making a whole lot of money at that time and we were reinvesting much of it back into the company, but it just felt right, so we did it. One day, a few years later, we were surprised to get a call from Virginia Tinley (from CAF) asking if Aspen would be willing to step up to being the title sponsor. We jumped at the chance! I think the previous title sponsor had had 35,000 employees, so Aspen, with maybe 75 employees, wasn’t in the same league, but we made the financial commitment and we continued to bring everyone down and to volunteer our time as well.

I started swimming sometime around 2005, and have do so every year since then other than this past year. My daughter had just started college at Brown University and the Best Day in Tri was the same weekend of her parent’s weekend. I was disappointed, but as Arnold says, “I’ll be back.” 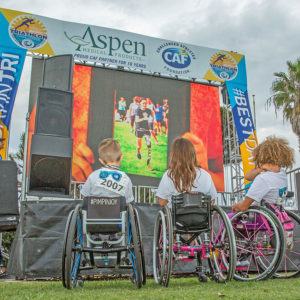 I can’t really remember when, but Dan was the largest individual fundraiser one year, and another year I was, so we do our best in every-way we can to support CAF.

We have introduced many people to CAF over the years and everyone has the same reaction. “WOW seeing those athletes, and seeing their attitudes was life changing. I have to step up my game!” And that is what it does for me every year, it makes me want to step up my game.

Is there a particular event that I recall? I’m a surfer so I’m very comfortable in the water. One year I had been having some difficulty breathing. The doctors said it was probably a heart condition, but I didn’t believe them (and I was right, but that’s a long story). Anyway, as the event approached I had some concerns, but I figured I’d take it as slow as I needed to and I’d make it. I had raised a lot of money and didn’t want to bail. I pulled on my swim cap and dove in. After the initial jolt of cold water adrenaline faded I realized I was out of breath and I had barely left the beach! One of the young spotters paddled over on a long board and explained that to make any progress, I needed to kick my legs to get my body from the vertical position. At that point the truth was that I was happy just to be treading water! However, I didn’t want to be the first person to turn back, so I did what I had told myself I would, I swam on at a pace that I felt I could manage. I think it took me over an hour to finish, but I did, so that is the swim that I most remember.

Aspen doesn’t sell products for the disabled so our involvement with CAF isn’t about promoting our products. We are however, proud of our involvement with CAF and feature it on our website and each year put together some kind of a promotion where we give a portion of sales of one of our new products to CAF. We also sponsor fund raisers within the company to generate funds for CAF. We have bake sales and raffles, and competitions all around CAF and several times a year we have an athlete come and talk to a company breakfast which helps keep the desire to up our game alive and thriving.

Like CAF, since 2000, Aspen has grown and prospered. CAF now has branches in other parts of the country, and Aspen now has a branch in Europe. I see CAF and Aspen continuing to grow because both organizations improve people’s lives. Over the 16 years that we have participated, I’ve gotten to see Rudy grow up. And Cody and even little Able, (although he still has a lot of growing ahead of him). And I’ve gotten to see Bobbie grow old, but his energy hasn’t flagged. Like CAF and Aspen, he’s still going strong!