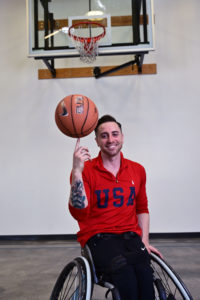 Challenged Athletes Foundation is no stranger to champions.

Recently, CAF welcomed NFL Winning Quarterback Drew Brees to the offices for a day of learning adaptive sports from top athletes. Among the athletes was Steve Serio, co-captain of Team USA Men’s Wheelchair Basketball Team. Steve brought his paralympic hardware, his incredible story of sport and his expertise for a day to remember.

Before the age of 1, Steve Serio had surgery to remove a spinal tumor which resulted in paraplegia from the compression of his spinal cord. Without knowing anything about adaptive sports, Steve’s family pushed him into trying something that no one was familiar with. Wheelchair basketball was like a foreign language. At 15, he had discovered his true athleticism in a sport that allowed him to embrace the things that made him different. “It was the first time in my life, I felt free from my disability.” He made his national debut 2 years later, played through college and then as Co-Captain of the Team USA Men’s Wheelchair Basketball Team, led the team to back-to-back gold medals in the Rio and Tokyo Paralympic Games.

In the beginning, though, Steve had many questions about the sport of wheelchair basketball. Do the players play on a 10-foot hoop? Can people dribble in a wheelchair? Are the rules the same? Basketball in a wheelchair, how is this possible?

When Drew arrived at the CAF headquarters, he had all the same questions. “I’m going to try their sport, with them,” said Brees. Participating alongside adaptive athletes is something that creates an inclusive community. “I can’t wait, it’s going to be fun.”

“There’s always a competitive element in sports, we didn’t get to where we are without an element of competition. I can guarantee you when Drew sits in the basketball wheelchair and tries it out for the first time, he’ll have his competitive juices flowing,” said Steve. 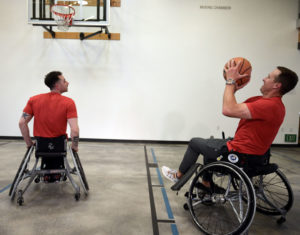 Drew strapped his legs into the loaner basketball wheelchair, Steve handed him a ball, offered him several helpful tips and they began passing it back and forth. They wheeled around the court, taking shots, shooting seated layups and smiling as they shared the power of sport.

Sure enough, Steve sank a three-pointer and Drew refused to get off the court until he sunk one from the top of the key. After a couple of misses, he called it, sank it and the room erupted with cheers!

“I think it was a transformative moment for Drew to understand how wheelchair basketball is played,” said Steve. “He treated me with great respect and really rose to the challenge of learning a new sport.”

It was a day to remember for both high-performance athletes.