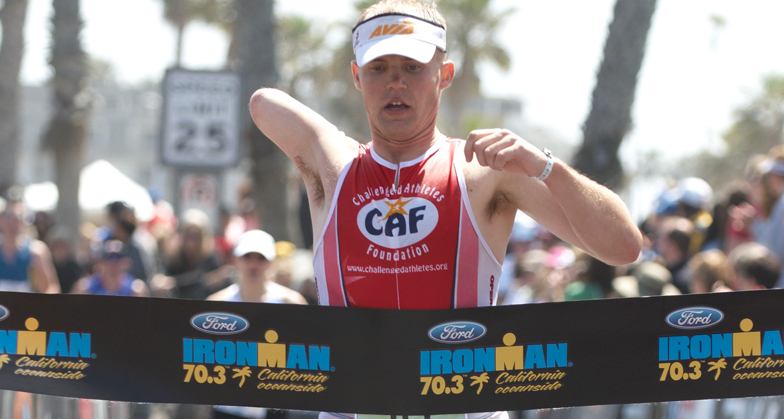 On April 2, 2016, six resilient Challenged Athletes Foundation’s® (CAF) Operation Rebound® athletes will compete in IRONMAN 70.3 California in Oceanside. The competitors will swim 1.2- miles in Oceanside Harbor, cycle a 56-mile bike route through San Clemente State Park and Marine Corps Base at Camp Pendleton and run 13.1 miles through Oceanside. Some will participate as individuals and undertake the whole race while others will participate as part of a relay team.

This select group of injured veterans and first responders are part of CAF’s Operation Rebound program, which provides unparalleled opportunities to pursue active, athletic lifestyles by offering access to funding for equipment, training and competition expenses. It is the premier sports and fitness program for American military personnel, veterans and first responders with physical challenges. CAF believes that involvement in sports at any level increases self-esteem, encourages independence and enhances quality of life.

“We are very grateful for being chosen as the official charity partner of IRONMAN 70.3 California Oceanside,” remarked CAF CEO Bill Geppert. “It is through great partners like IRONMAN, that we are able to raise funds and provide life-changing opportunities to thousands of challenged athletes, so they can pursue an active lifestyle through sports.”

• Corporal Daniel Riley, USMC (ret.) – bilateral above-knee amputee (Vail, Colorado) – Upon returning from deployment, Daniel volunteered for an additional deployment as a combat replacement and deployed to Afghanistan. He lost both his legs from stepping on an IED in Afghanistan. Daniel endured 25 surgeries to his legs, arm, lung, and abdomen, resulting in above-knee amputations to both legs and the loss of three fingers on his left hand. While rehabbing at Naval Medical Center San Diego, Daniel was introduced to CAF’s Operation Rebound through their weekly surf clinic. This past winter, Daniel went to surf the world’s most notorious wave, Pipeline in Hawaii. Watch CAF Athlete Profile video on Daniel Riley here – https://youtu.be/js5dUFseIQY.

• Captain Eric McElvenny, USMC (ret.) – below-knee amputee (San Diego, CA), lost his leg while working with Afghan soldiers in 2011 when he stepped on an IED. With the support of CAF’s Operation Rebound program, Eric raced in his first two triathlons just 6 months after taking his first post injury steps, and now competes regularly in IRONMAN races. Speaking about CAF’s Operation Rebound, Eric said, “I hope to give back to others as much as Operation Rebound has given to me.”

• Master Sergeant Shannon “Shay” Hampton, US Air Force (ret.) – traumatic brain injury (Reno, NV), is a member of the United States Air Force. While serving in Iraq, he was wounded and suffers from Traumatic Brain Injury (TBI). Shay remained very optimistic about his recovery as he did not believe in the word “quit.” So much so, in 2015 through the help of CAF’s Operation Rebound Program he was flown out to participate at IRONMAN California 70.3. Shay participated in the 1.2 miles swimming leg of the the half IRONMAN. Despite being exhausted after completing it, he felt the healing power of sport and on the spot declared he would do the entire IRONMAN 70.3 California in 2016.

• Scott Leason, Navy Veteran – visually impaired (San Diego, CA) – When Scott was 20 years old he joined the U.S. Navy were he served honorably for 7 years. In 1993, while working at a convenience store, Scott was shot in the head during a robbery. The bullet missed Scott’s brain but resulted in the loss of both of his eyes and his sense of smell. Though Scott faced many challenges adapting to the loss of his sight, the activity he missed most was being involved in sports. In 2007 Scott began waterskiing again, this time as a blind athlete and in 2008 he began receiving CAF Operation Rebound support for his waterski training. At the age of 59, he claims to be in the best shape of his life thanks to CAF’s Operation Rebound and his life-time membership to the YMCA from CAF.

CAF’s Operation Rebound program funds equipment, training and travel expenses that can help our injured troops and first responders harness the healing power of sport – whether the goal is to win Paralympic gold or simply run around the block with their kids. In the last year, CAF has awarded a record 260 Operation Rebound grants and has awarded over $2.5 million to date.

CAF is accredited by The Patriots Initiative (TPI), as one of finest non-profit organizations in the nation supporting America’s armed forces service members, veterans and their families.

The Challenged Athletes Foundation® (CAF) is a world leader in helping people with physical challenges lead active, healthy lifestyles. CAF believes that participation in physical activity at any level increases self-esteem, encourages independence and enhances quality of life. Since 1994, more than $70 million has been raised and over 11,000 funding requests from people with physical challenges in all 50 states and dozens of countries have been satisfied. Additionally, CAF’s outreach efforts reach another 60,000 individuals each year. Whether it’s a $2,500 grant for a handcycle, helping underwrite a carbon fiber running foot not covered by insurance, or arranging enthusiastic encouragement from a mentor who has triumphed over a similar challenge, CAF’s mission is clear: give opportunities and support to those with the desire to live active, athletic lifestyles To learn more, visit challengedathletes.org or call 858-866-0959.