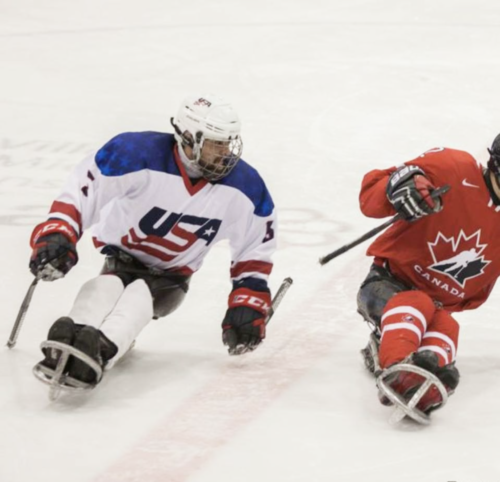 The buzzer sounds, signaling the start of the game as two teams head to the center of the ice for the puck drop. Sounds like a regular hockey game, and it is, with one major difference – the athletes are in sleds!  The sport of sled hockey has been around since the 1960’s. It was invented in Sweden by a group of people who wanted to play hockey even though they were physically disabled. Sled hockey mirrors stand up hockey in many ways, except for the major equipment differences required and subsequent skating and rule distinctions. 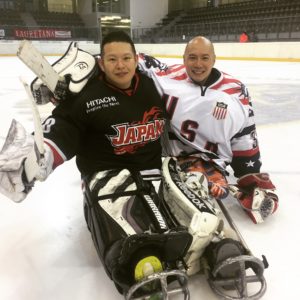 Jen Lee, Sled Hockey player for TEAM USA with a player from Japan

Sled hockey players come in all ages and abilities. Leagues in the U.S. accommodate for athletes ages 3-50+, from novice to advanced. Players sit down in plastic buckets that are attached to metal frames with two blades under the bucket. The blades can be adjusted either farther apart or closer together. The distance between the blades effects how well an athlete is able to balance and turn. It can take a few months to gain balance so newer players tend to keep their blades farther apart.

Players use two sticks made from either carbon fiber or wood to move across the ice as well as handle and shoot the puck. At one end of each stick are metal picks that are used to dig into the ice. On the other end of each is a stick “blade” used for controlling the puck. Propelling in the sled while also maintaining control of the puck is a skill that can take years to master.

Rules of the Ice 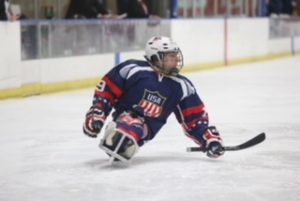 Sled hockey is a full contact sport, which comes as a surprise to some people, but it just wouldn’t be hockey if checking wasn’t allowed. One disadvantage that sled hockey players face is that skating backwards is nearly impossible, making defense more about taking the right angle. At times,  defenders must turn and go in the same direction as the opposing player who has the puck and is right behind them. It becomes a game of cat and mouse, the defender slowing down just enough so the player either has to slow down or try to race around the defender.

When it comes to rules, stand-up hockey and sled hockey are basically identical except for one penalty, which is called T-boning. This is when one player hits another player with the front of their sled making a “T” shape. These collisions are somewhat dangerous and entertaining at the same time – it’s like watching a miniature car wreck on the ice. Usually both players are uninjured as the frame and the buckets of the sleds take the brunt of the hit.

Sled Hockey in the Paralympics

Sled hockey was brought into the Paralympics in the 1994 Lillehammer games and has been very popular ever since. To make the USA national team, it takes just as much time and dedication from athletes as any other Olympic team. The U.S. is a powerhouse in hockey, rivaled only by one other country – Canada.

This year in the 2018 Paralympics, the U.S. sled hockey team is attempting to go for their third straight gold medal and their fourth overall! Tune in March 9-18 to watch the excitement; you will certainly be impressed not only with the skill and physicality of sled hockey, but also how much fun it is to watch. 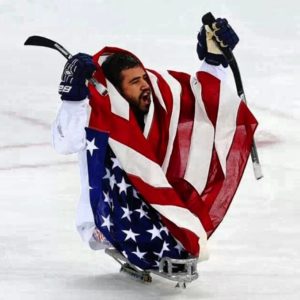