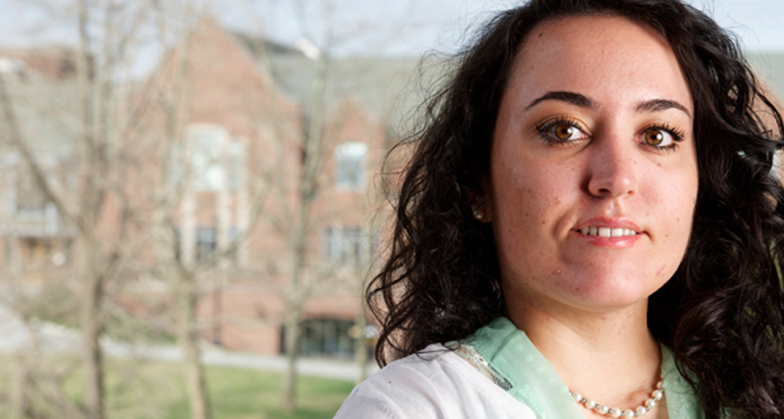 Kristin Duquette is a CAF supported swimmer who competes in the S3 class with Muscular Dystrophy. She is also a contributor to the Huffington Post, former intern at the United States Senate, former Goldman Sachs Scholar and current representative for the Academic Council on the United Nations System. With support from the Challenged Athletes Foundation, Kristin continues to live out her passion and is focusing on open ocean swims and triathlons. Kristin recently had the opportunity to speak at the United Nations; read her speech below about the ability inherent in all people, including the physically challenged.

Good Afternoon. I’d like to thank the United N 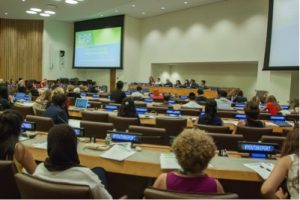 ations’ Department of Economic and Social Affairs for inviting me to speak about the importance of sport and community engagement with the launch of the UN World Youth Report. It is an honor to be here today.

Sport has the ability to unite us when our world is most divided. On an international level, we see the creation of a refugee team for this year’s Olympic Games. On a national level, we witnessed Nelson Mandela uniting his country post-apartheid with rugby and on a local level, we see communities play together during war and in post disaster situations.

Sport and physical activity provides numerous benefits and crosses all barriers such as economic status, gender, race, religion, and political ideology while celebrating our humanity – our bodies, character, the human spirit, and all abilities, including people with disabilities who participate in adaptive physical education, the Special Olympics, Deaflympics, or the Paralympic Games. But the true responsibility to promote inclusion and harmony lies within each one of us: to use sport as a tool for community growth and unity, specifically with vulnerable groups such as women, and individuals with disabilities.

Research has shown that youth, “with disabilities are nearly 4.5 times less likely to be active than their peers without disabilities” and the barriers for young girls and women with disabilities are staggering[1]. “Imagine the barriers a girl faces if she has a disability, lives in poverty and comes from a racial or ethnic minority group. And what about when society says she cannot have the same opportunities as the boys?”[2] “Women with disabilities face dual discrimination when it comes to experiencing the benefits of sport due to discrimination, stigma, negative perceptions based on societal and cultural standards to lack of opportunities and community support.”[3] As a female athlete with a disability, I experienced my own discrimination when the head coach asked me to leave my collegiate swim team due to my disability. In my early years of competing officials saw my wheelchair and mistook me as an audience member rather than a competitive athlete. I’ve even had swimmers ask me how I’m even an “athlete” minutes before I raced. 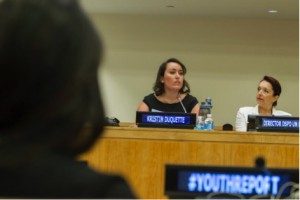 Discrimination is not selective and can be experienced by everyone, including world-class athletes. Put another way, discrimination itself does not discriminate. Therefore, it is not surprising that the majority of young girls with disabilities struggle with their identity in relation to society’s standards. Athletic participation, however, challenges typical stereotypes and can provide a wealth of confidence when an athlete is fully supported. And I can personally attest that there is nothing quite as empowering as breaking down stereotypes and having others finally view you as you’ve always viewed yourself.

A recommendation I would offer to the UN system would be to promote and engage organizations supporting athletes with disabilities. Providing community support establishes the foundation for women and young girls with disabilities to succeed not just in athletics, but also in daily life. Global organizations can provide the impetus for this. For instance, organizations like The Challenged Athletes Foundation, provides monetary and social support for travel, proper training, equipment, mentorship and competition for athletes on all levels – from play and recreation to elite status.[4] This support is crucial for women and young girls with disabilities, creating a positive atmosphere that promotes personal growth and confidence. Support from disability sport organizations played a vital role in my athletic career. I know for a fact that I would not have broken multiple American swimming records and represented Team USA on an international level without the support from The Challenged Athletes Foundation. More importantly, beyond the laps and record breaking times, I felt like I belonged to a community where I was accepted and valued by my peers.

It is up to all of us, both with and without disabilities, to make others feel included and valued in our communities. We have the power to break down barriers, remove fear, and provide love and respect to all based on their humanness. When an athlete grows in confidence and establishes a strong sense of self, she is more likely to contribute to the community and feel valued. We all have a responsibility and duty to engage everyone in community life, and through sport, we can unite diverse populations, including people with disabilities.

This is why the World Youth Report on Youth Civic Engagement is so important. The report emphasizes and highlights the power of sport and the inclusion of youth with disabilities in sport and all aspects of everyday life. This is what it means to be human. To be involved, valued, and engaged. Again, it is up to all of us to move in the direction toward fully inclusive, active, and healthy communities around the world.

It is truly such an honor to be here today, and thank you for all the good work you continue to do to promote the health and welfare of young people around the world.