Over 900 athletes of all abilities joined CAF in Mission Bay October 21-23 to change perceptions, educate, and celebrate the power of sport

“This year marks CAF’s 29th Annual Community Challenge Weekend where athletes could accept the challenge to swim, bike, run or participate in a multitude of sport activities. It’s a weekend to celebrate inclusivity in sport, the healing power of sport, and celebrate the community that makes such a huge impact for our athletes. The inspiration and enthusiasm each athlete and supporter brought to the weekend was unmatched.”
– Kristine Entwistle, Chief Executive Officer 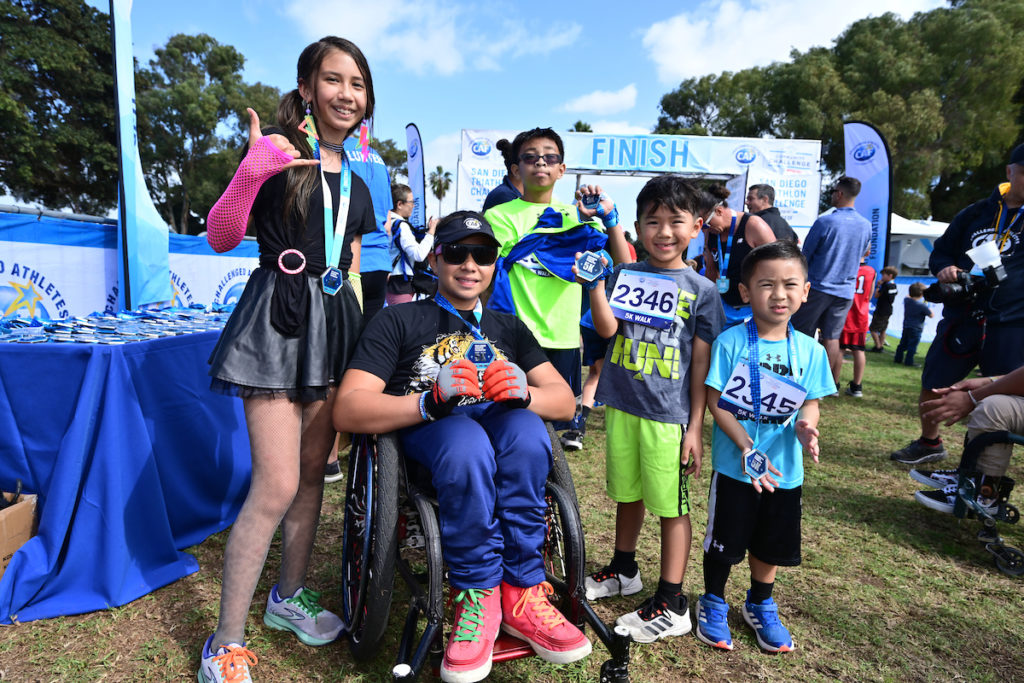 “I did it!” she exclaimed as she emerged from the water. “I wanted to accomplish it, so I jumped out of the raft, and I DID IT!”

At this year’s San Diego Triathlon Challenge, Tessa geared up to be pulled by her guide for the half-mile swim in Bonita Cove with a team of challenged athletes and supports. After circling the first buoy and heading towards the shore, Tessa decided that she didn’t want to sit in the raft anymore. With cheers from the shoreline, she jumped in the water and headed towards the finish line.

Tessa was born in Ethiopia completely missing both her legs and her right arm above the elbow. She was adopted when she was 1.5 years old by her parents, Meagan and Chase, and her older brother who is also adopted and an amputee, Elias. 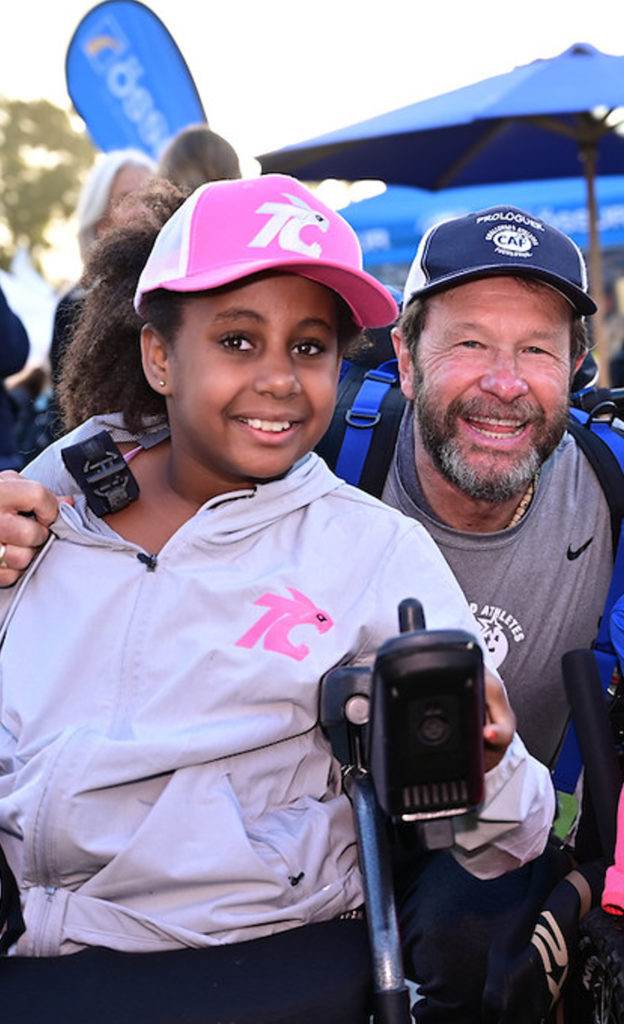 The weekend kicked off on Friday where CAF hosted an Open Water Adaptive Swim Experience with USAT and its first-ever USABA Blind Soccer experience. Adaptive Tennis and Pickleball Clinics were also popular. In the afternoon, guests rallied at La Jolla Shores to welcome home over 130 cyclists from CAF’s Million Dollar Challenge presented by Sully Entertainment who had just arrived from a seven day, 640-mile bike ride from San Francisco to San Diego. Later in the evening, CAF hosted the Celebration of Abilities Awards which recognized partners and challenged athletes from around the world for their trailblazing and inspirational achievements throughout the year. Congratulations to all the athletes who were given grants this year and those who were recognized.

This year, we welcomed Liza and Beth James (Team Liza) on the Million Dollar Challenge and to participate in the San Diego Triathlon Challenge presented by Dan + Geof. This mother daughter duo recently became the first to cross the IRONMAN World Championship finish line.

In 2004, Beth James and her three children were in their vehicle when they were struck by two cars drag racing through the streets. Beth’s youngest daughter Liza ended up with severe brain damage from the crash leaving her unable to walk, talk, or perform basic daily functions independently. Beth leaned into the power of sport to help both her and Liza through the recovery process. Beth saw the joy on Liza’s face when they started running so one race snowballed into the next. their very first ever triathlon was at the San Diego Triathlon Challenge where Beth witnessed the sheer joy on Liza’s face swimming, biking and running together. The two have been racing together ever since. 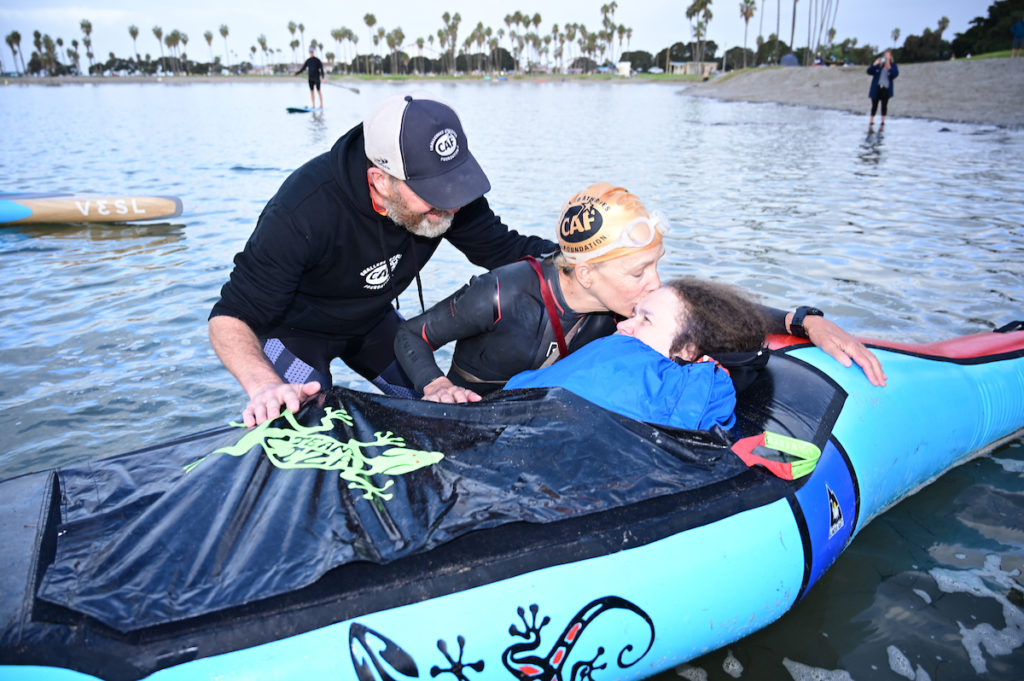 Saturday consisted of CAF’s adaptive sports clinics including Össur and CAF Running and Mobility Clinic, Adaptive Surf Clinics presented by Cavignac, Wheelchair Basketball Clinics, and USABA’s Goalball Clinic. Over 150 athletes with physical disabilities from across the world received expert coaching, instruction, and mentorship in a variety of sports. 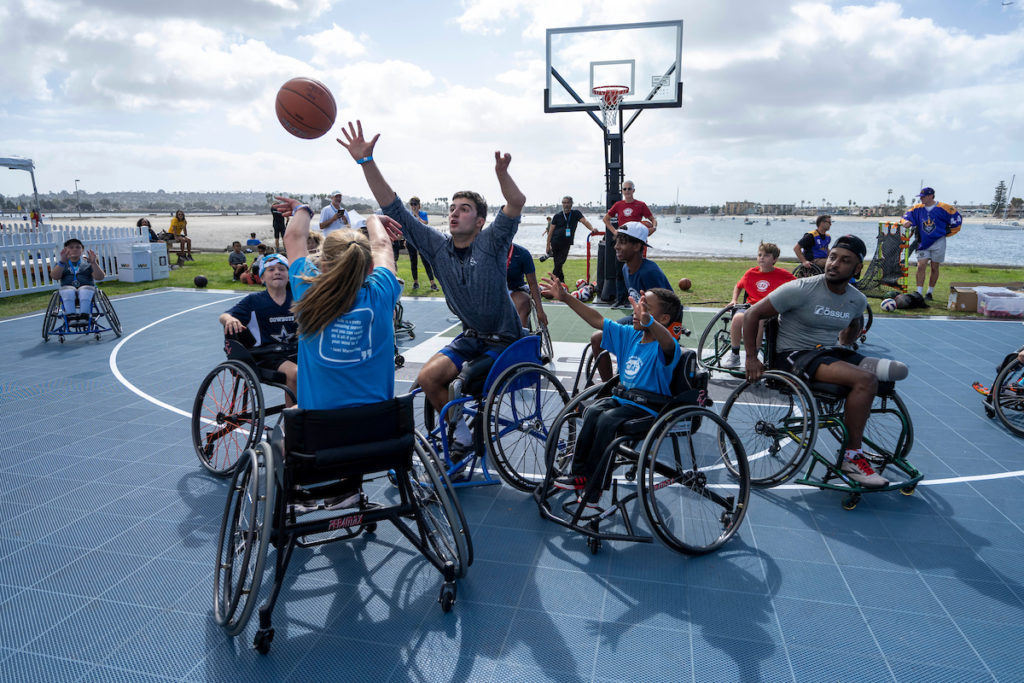 “This weekend athletes with varying physical disabilities including amputations, spinal cord injuries, visual impairments, and more came together from all over the world to make friends and become a part of the CAF family. Community Challenge weekend is all about inclusivity, living life without limitations, and teaching people that it’s okay to be different. I have been a part of this family myself since I was 8 years old first as an athlete, and now as a staff member.”
– Rudy Garcia-Tolson, Athlete Relations, and Programs Manager 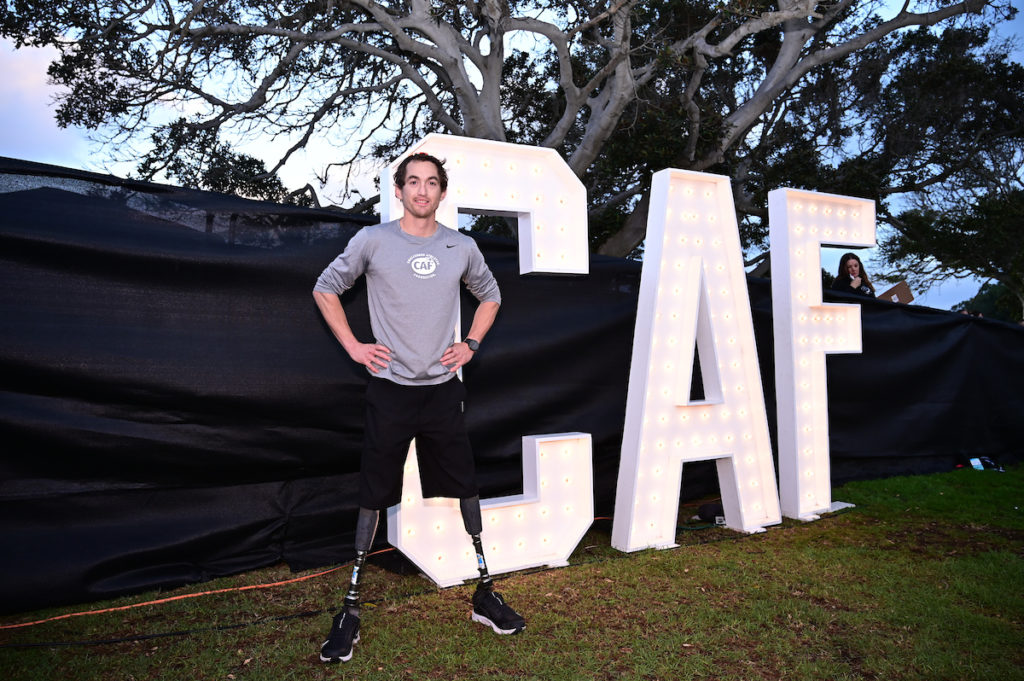 On Sunday at Bonita Cove in Mission Bay, sports legends, celebrities, professional athletes, supporters, donors, and challenged athletes from all over the world gathered for the Parade of Athletes just before CAF’s San Diego Triathlon Challenge (SDTC) presented by Dan + Geof. Known as “The Best Day in Tri” SDTC included a one-mile bay swim, a 40-mile bike ride, and a 10-mile run. Athletes and their families showcased perseverance and strength with record breaking race times. View SDTC race times here. Other Sunday highlights included two events presented by EōS Fitness: Yoga by the Bay and Tour de Cove Stationary Cyclethon (TDC), where athletes participated as individuals in a 4.5-hour stationary cyclethon, or 1.5 hours as part of a relay team. 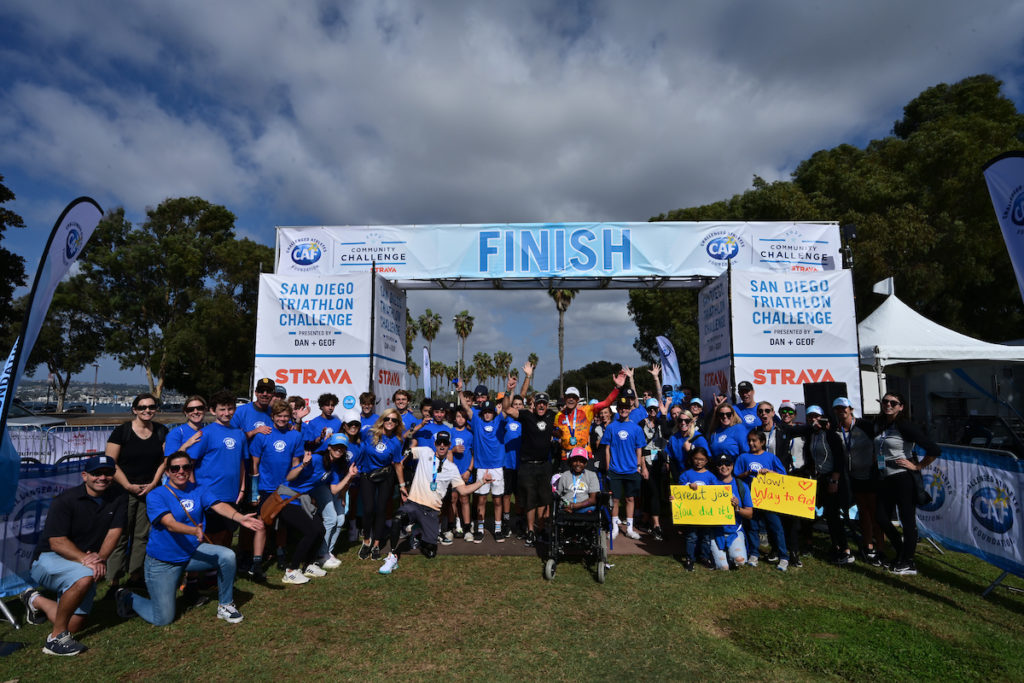 Jeffs’ Beach Burgers, a local La Jolla hot spot, was on-site all day providing free food to keep everyone fueled. Another new attraction this year was Team Toyota’s Athlete Lounge, which featured a comfortable shaded are where athletes and their families could relax and recharge.

Athletes were also able to get their walk or roll on at the 5K Fitness Walk and the Jami Marseilles Challenged Athletes Kids Run and Roll, presented by Philadelphia Insurance Companies for youth with physical disabilities. Kids kicked into high gear during the kids run & roll, climbed to new heights on the rock wall, paddled out in the bay on kayaks, and got a little sandy playing beach volleyball. 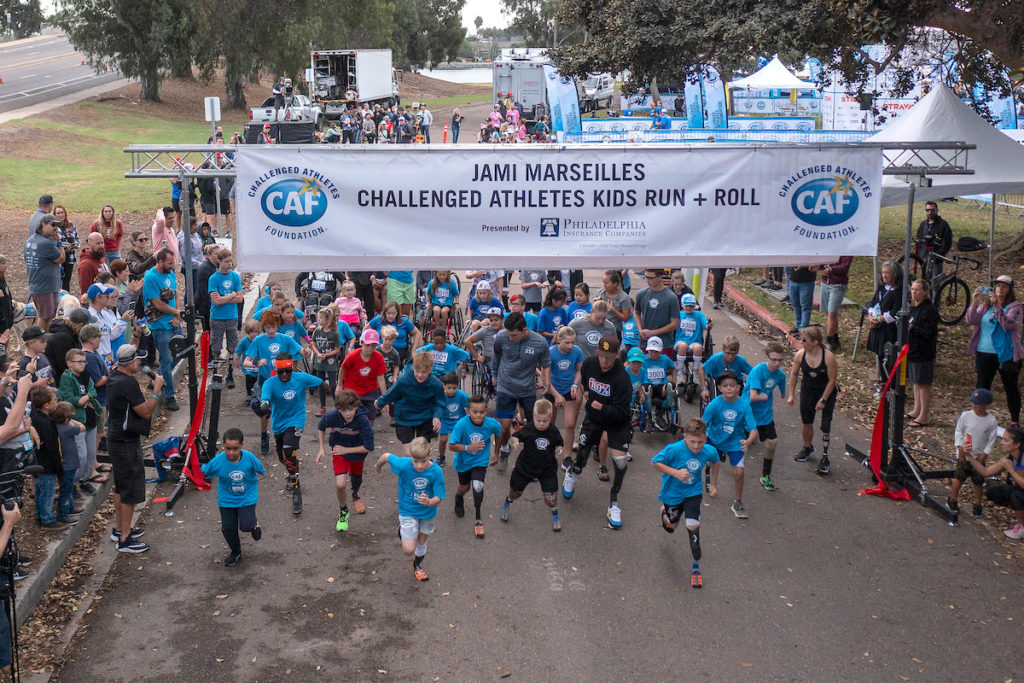 “You have no idea how much this means as a dad, to be able to expose my daughter to this kind of experience, to an organization that can provide her with these remarkable opportunities to connect with peers who face similar challenges, to participate in the sports she has always loved, and to take on new adventures.”
-Benjamin Parker, Rosalie’s Father

Rosalie Parker, an eleven-year-old quadruple amputee from Boise, Idaho attended this year’s Community Challenge Weekend for the first time. Rosalie, who lost both her arms and legs as the result of an infection following a car accident, had never been exposed to the world of adaptive sports prior to learning about CAF. “This is the first time I’m seeing someone who looks like me” she shared after meeting Landis Sims, a fellow quadruple amputee. 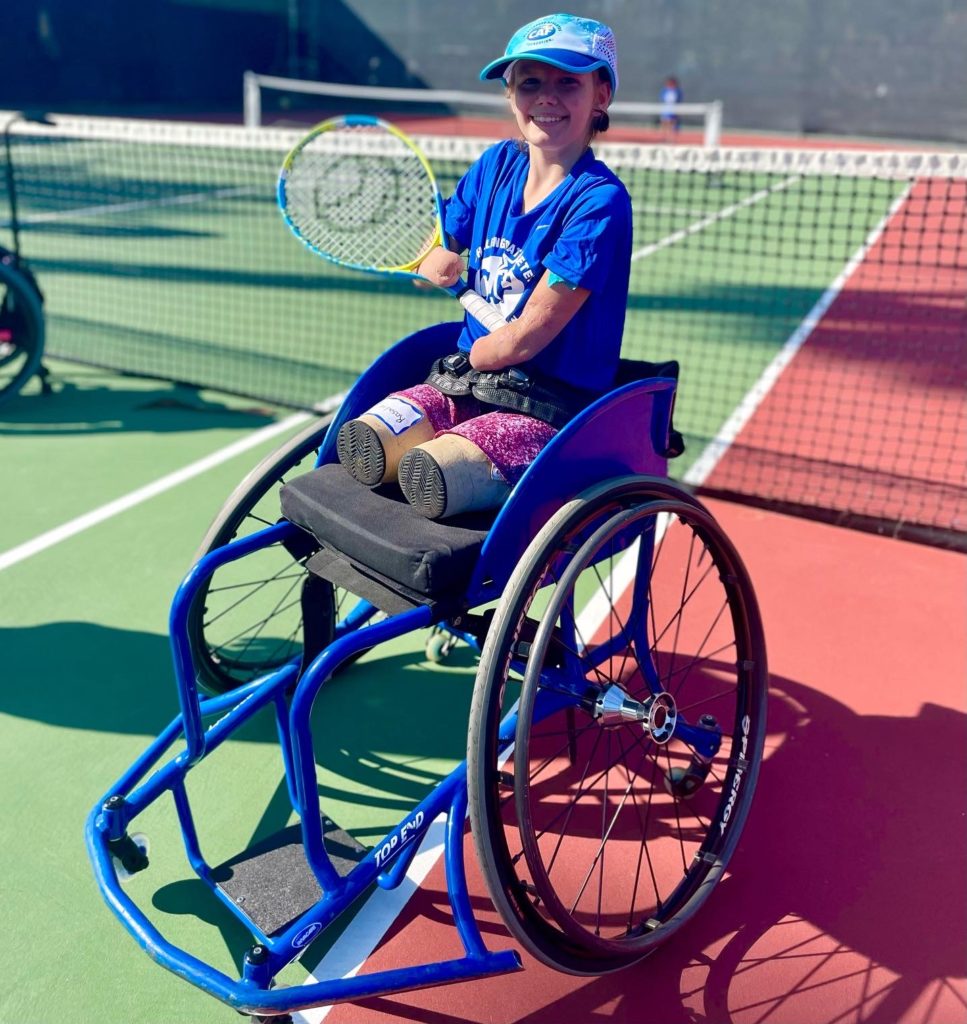 Funds raised from all weekend activities directly support CAF’s mission to empower lives through sport, so athletes can pursue active lifestyles and experience life without limitations. CAF believes that involvement in sports at any level increases self-esteem, encourages independence, and enhances one’s quality of life. These inclusive events showed the true impact of CAF’s mission and how our efforts and your support empower the lives of challenged athletes across the world. 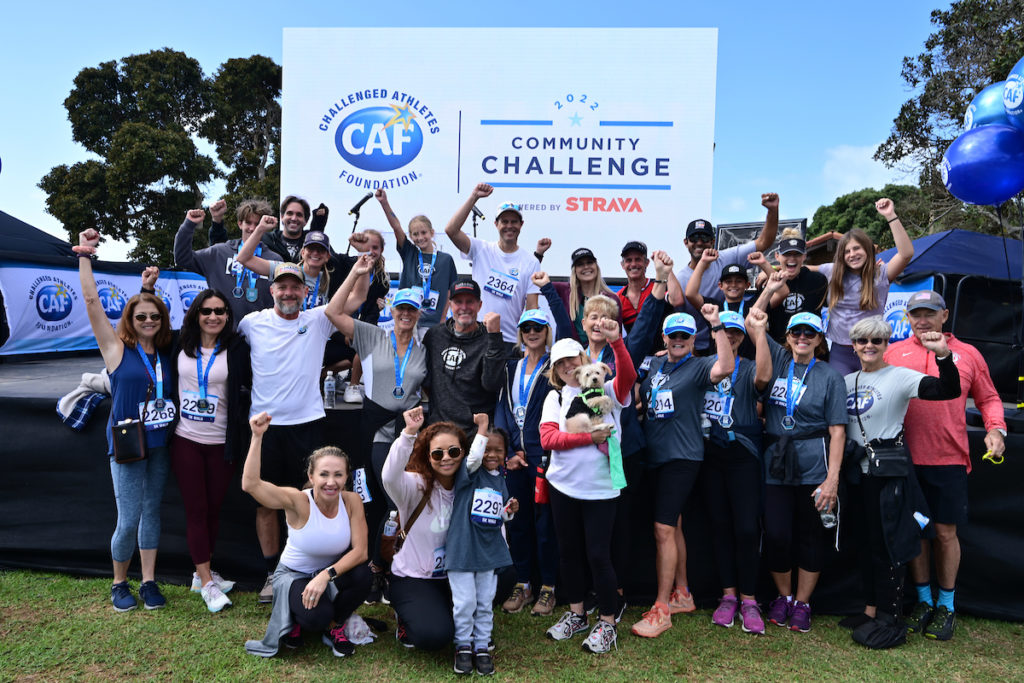 Thank you to our amazing supporters and sponsors who help make this weekend possible including: