After months of training in Montana and Utah, members of the U.S. Paralympics Nordic Skiing national team were finally given the opportunity to travel and compete against their international counterparts at world cup events in Slovenia.

Follow along as CAF Developmental Coach Wilson Dippo details his travels with the Paralympic athletes and coaches as they prepare and compete in three cross country and three biathlon races. 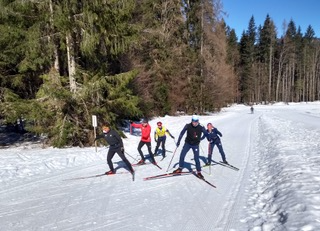 After a few grueling days of travel across the U.S. and Europe, the time had come for the team of athletes and coaches to hit the ski trails near Kranjska Gora, Slovenia. Through a series of light interval sessions, the group of weary travelers went from jetlagged to jazzed as they embraced their excitement to be back on skis.

I was tasked with guiding athlete Max Nelson, a 17-year-old visually impaired (VI) athlete from Minnesota. Max and I had skied together before in New York, so he was familiar with my calls, even on the crowded Slovenian trails. We blew right through the intervals and made our way to the dark corners of the pain cave. The final part of our workout involved skiing across the Italian border – the only international travel we didn’t need a COVID test for!

Today was one of those days of skiing that you remember for a long time. We thought yesterday’s views on the lower trail were incredible, but today’s views truly took our breath away. We skied at the foot of the historic ski jumps of Planica, surrounded by huge peaks and sheer cliffs.

The workout on tap was an easy distance ski. I was guiding Max again and we took the firm and fast snow on the technical trails as an opportunity to practice cornering. For the uninitiated, cross country skis are optimized for climbing, not descending, but what goes up must come down! Taking corners on these skis requires a fine balance of skating, stepping, sliding and scrubbing speed.

Max and I found a technical downhill with two sweeping turns followed by a sharp, 180-degree, off-camber right turn at the bottom of the hill. We ran through the hill a half dozen times, scrubbing a little less speed with each repetition and continuing to smooth our skating around the corner. By the last lap, the sun hit the trails and Max had gained a lot of confidence which carried us through the rest of our afternoon.

Not every day is a bluebird day on the hills. Today I spent the majority of my time shuttling athletes to and from the venue, but the views were just as great. I was able to get my hands back into some klister, however. Klister is the substance used to help our skis grip when the snow is wet and warm. It’s thick and sticky like molasses and lives up to its name: a Norwegian word meaning a mess. The mess is worth it, though. If you love classic skiing, especially in sunny, warm weather, there’s nothing better than a perfectly waxed klister ski. 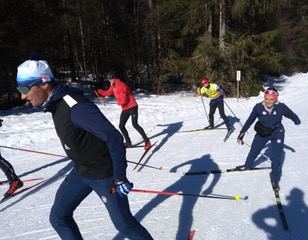 It’s pre-race day! The pre-race workout in Nordic skiing is a time full of nerves, excitement and high anticipation. There’s a lot to get done.

First, athletes need to decide which skis they’ll use for the race. For an elite-level racer, that may mean choosing just two or three pairs from eight sets of skis. For a standing athlete, that means skiing skis side-by-side to feel the slight differences in flex, camber and glide. Sitting athletes tend to choose between a classic ski with better top speed or a skate ski that is more responsive.

Next, athletes previous the course. While the route may have already been decided, weather and track conditions can drastically change the course. Today we were met with soft, sugary snow in berms on all the major corners, with one corner in particular packing a double whammy of an exposed, icy layer and an inconsistent berm.

Finally, there is a typical pre-race workout that athletes use to prime their engines. Most recreational athletes tend to think that taking it easy the day before a race is the best way to go, when in reality that’s one of the worst things you can do to prepare your body for a huge effort the next day. For that reason, we stick to an easy ski loaded with a few different speeds or a full interval session.

The most spectacular part of today was watching our VI athletes on the downhills. In VI skiing, the athlete can grab the pole of their guide on the downhills for steering aid. The amount of confidence you have to put in another person to let them guide you is enormous in the first place, let alone racing just three feet behind them at 30 miles per hour. Our energy is high, but so are our nerves, and photos from back home helped motivate us for tomorrow. 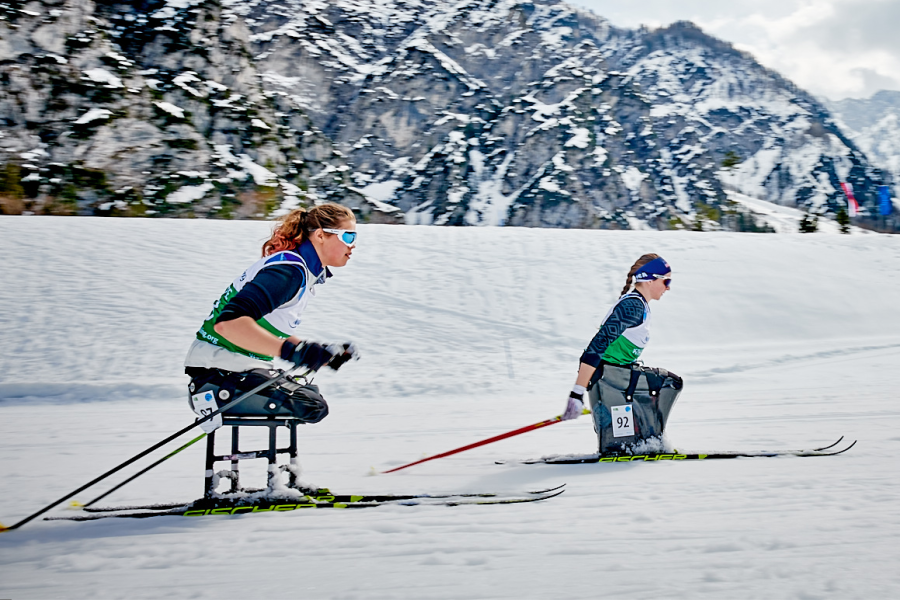 It’s time for us to put our game face on, starting with the sprint race. Nordic skiers have a strange way of giving things names that don’t really match what they actually are. To most of the world, a “sprint” conjures up images of Usain Bolt running 100m in 9.5 seconds. In cross country skiing, it’s incredibly rare to find a sprint course shorter than about 800 meters, and a typical course has a handful of gnarly climbs and descents. Depending on the course, it typically takes between 2-4 minutes to complete. To make things even harder, sprint races are typically win or go home, with 3-4 rounds to advance through. Team USA racers Lera, Ruslan and Dani all advanced through the qualification round and into the heats – a huge accomplishment! Racing in the heats meant head-to-head competition against the best in the world. With lots of lessons learned, Oksana won the women’s sitting division and Kendall finished second.

With no races today, we trained for the biathlon race. I spent the morning testing waxes for races coming down the line. Testing skis means lots of laps on short loops, parsing the minute differences in ski speed between each pair. In the afternoon, I was stationed on the range handing rifles off to athletes as they prepared to shoot and watching their groupings through the spotting scope.

As a high school athlete, I thought shooting was guns was fun and I was a cross country skier, so I dabbled in biathlon. It was a natural fit. These days I think biathletes forget how much fun it is to knock down targets. A couple early misses in a training session and some athletes start to get a sour demeanor. But that wasn’t the case today! The mood on the range was exceptional and the targets were nearly all falling. It’s hard to prove causation, but my college ski coach would always say “happy skiers are fast skiers” and perhaps “happy shooters are straight shooters” is equally valid. 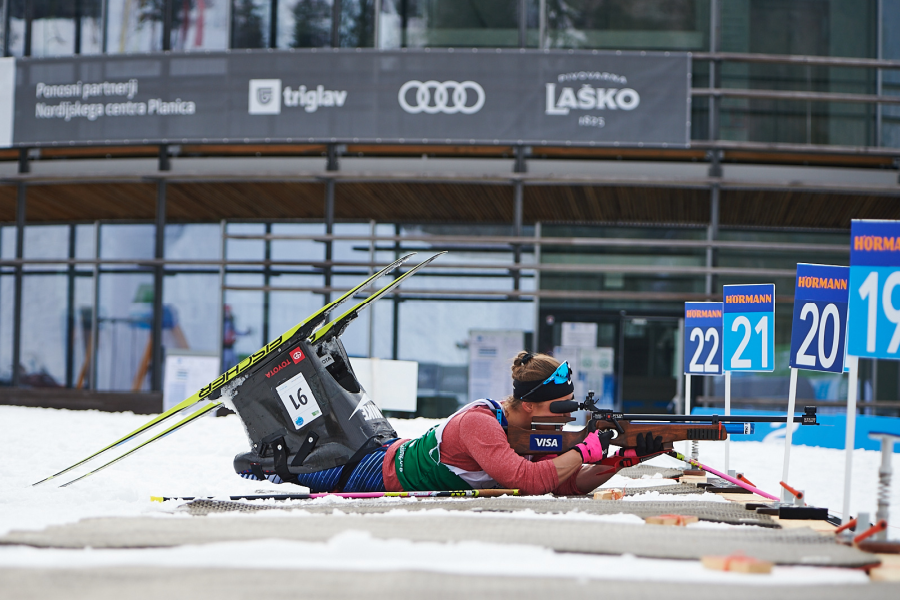 On Saturday we competed in the mid-biathlon race made up of five ski segments and four shooting segments. Depending on the event, for each missed shot in biathlon you either have a time penalty added to your overall race time or you ski a penalty loop around 100 meters long. As a team, we spent more time in the penalty loop than we hoped. Athletes made up for it on the racecourse though, skiing smoothly and powerfully throughout a challenging loop. Oksana and Kendall once again placed first and second in the race.

Both Max and Drew sat the biathlon out to save some kick for the distance skate race on Sunday. After the biathlon, we previewed the loop for that race. The Planica Nordic Center is a high valley surrounded by steep, cliffy mountains. That means the sun doesn’t hit the trails until late morning (around 10:00am) and slips back behind the mountains by 2:00pm or 3:00pm in the afternoon. The warm temperatures had turned the course into mashed potatoes, but eh early shade dropped the temperature quickly and the conditions deteriorated. The shady side of the course had three inches of slop with a crispy, breakable layer of ice forming over the top. Rather than dwelling on challenging conditions, we took the opportunity to work on balance and timing while throwing in a few quick efforts to prime the engines for the final race. 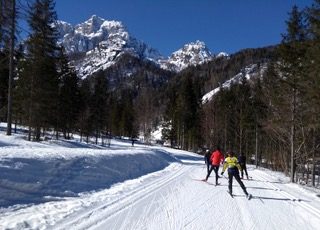 Sunday was the distance skate race for standing athletes, and distance cross country for the sitting athletes (12.5km for men and 10km for women). The courses had long sustained climbs and technical downhills When we arrived at the venue, the conditions were as close as you can get to perfect. The track had set in such a way that the trails were firm and fast, but still soft enough to get a strong edge.

Oksana set the standard early, winning her fourth of four races in the women’s sitting class. Similarly, Kendall was also on the podium in 2nd place for the fourth time this week. Perhaps the most impressive part of the races from our standing athletes was the exceptional pacing. 10 and 12.5km is a long race for these younger athletes and to make it harder, temperatures were between 50 and 60 degrees during the standing races. All four standing athletes skied consistently with strength through the entire race. 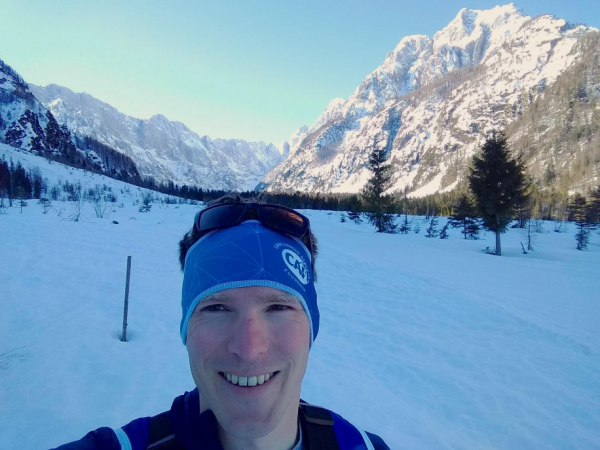 Although Wilson made his way back to the states before the end of the World Cup, Team USA continued on, finishing with 12 medals including six gold medals won by Oksana Masters, and five silver and one bronze won by Kendall Gretsch. Visit the Team USA website for a full list of finishers.