Rye becomes a true Olympic village, full of heroes, every single September. And we have so many good people to thank for that honor. This year’s sold out 34th annual Zoot Westchester Triathlon was held in its traditional spot of Rye town park on Sept 23rd (kids race and sprint distance) and Sept 24th  (Olympic distance) and gave a real lift to each attendee, whether they volunteered and cheered, or raced and crossed. And it is safe to say that the cause and the strong sense community are what truly hold this experience up so high, year after year, for so many.

Thanks to the race organizers, sponsors and volunteers, the Zoot Westchester Triathlon is always an important race for the CAF community.   Dozens of athletes who are amputees, paralyzed or who have conditions such as spina bifida or cerebral palsy are able to participate in one of the 3 distance races.

Additionally, funds raised from the event, benefit CAF and several other local charities.  Doug Olson, Senior Development Director, Northeast Region, explains, “over the past 12 years, support from the race has helped CAF provide adaptive sports clinics for everything from surfing to lacrosse and tennis and adaptive sports wheelchairs and prosthetics for those who are amputees, blind, paralyzed or have any other physical disability.” 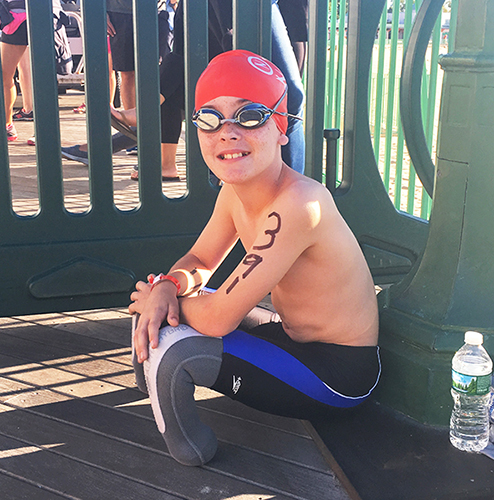 Jack, a bilateral leg amputee, competed in his first ever triathlon

Doug continued by adding that “it’s all about getting back into the game, getting back to that starting line. The equipment needed is not usually covered by insurance, so we provide that funding and allow access to the sports they love. The funding from the Westchester Triathlon allows us to make adaptive sports more accessible to all, including children, injured military veterans and injured first responders.

“There is such a need, and there are so many people coming to us for support—we are always looking for additional supporters. We fund 50 percent of what people are asking for and we would love to fund 100 percent of requests. The Westchester

Tri is such a great example of the kind of philanthropy we need more of,” Doug admitted.

“This race is so accessible and wheelchair friendly and the volunteers are all great and supportive. We had 20 CAF athletes race this year including Jack, age 11, a bilateral leg amputee. It was his 3rd ever Tri and his first open water swim and his first ever Zoot Tri.”

“One of our Ambassador athletes, Rudy Garcia-Tolson—#NoLegsNoLimits—a double leg, above the knee, amputee, competed on Sunday. At the dinner the night before the race, Rudy spoke explaining that he ‘was born with a birth defect on my legs, and my fingers were webbed, and my parents did not want to cut my legs off, but after 15 operations, I told my parents that it was OK to cut my legs off because I wanted to be normal, and do what the other kids were doing.’ So they did, and Rudy got prosthetics and started playing soccer, walking home from school and learned how to ride a bike. Then he became a 4-time Paraolympic athlete, and a gold and silver medalist.” Phil shared with reverence. 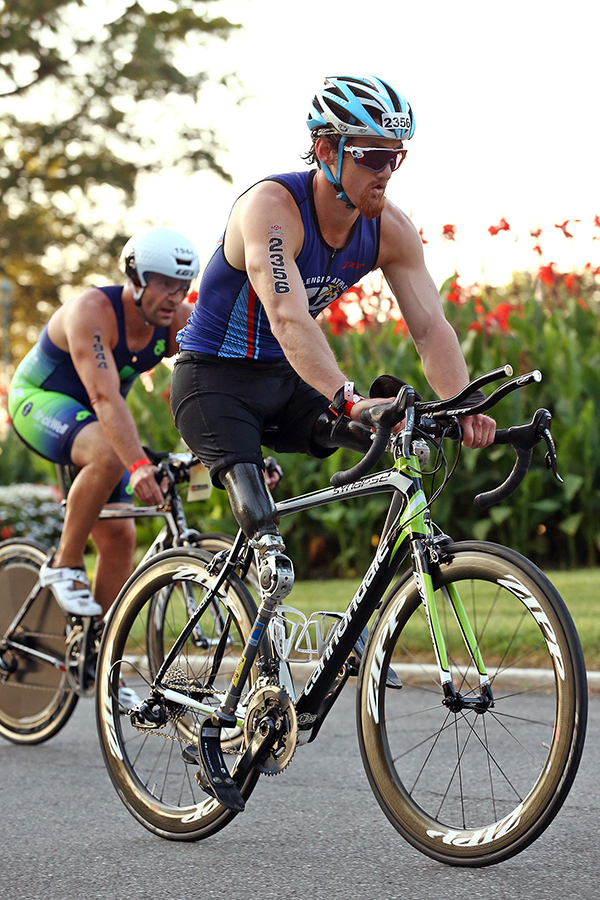 Rudy Garcia-Tolson, a 4-time Paralympian, during the bike portion

On Playland Beach Sunday morning, “Rudy pulled himself all the way down the beach to the waterfront and got in the water with everyone else—no special treatment. And that is the beauty of CAF, they get ‘em back in the game by giving them prosthetics and letting them race and be ambassadors and inspiring so many people,” effused Phil. When not racing, Rudy teaches swimming to disabled and able-bodied athletes in Westchester and NYC.

And Keiron McCammon, another CAF Ambassador athlete, a hand amputee, was paragliding in Colombia in 2006 and hit powerlines on his landing. He went from a regular life to just surviving. Today Keiron’s motto is “I’ve gone from surviving to thriving.” Keiron has done several Zoot Tri’s and 3 Ironmen and climbed Mt. Killamanjaro in 2016.

Doug adds “CAF empowers these athletes and give them a sense of accomplishment and that leads to a boost in confidence, which helps them carry on to do marathons, ironmen or other sports, and it helps them set their sights on other things.”

Sarah Reinertsen, another CAF athlete, and the first woman leg amputee to complete Ironman Kona in Hawaii with a prosthetic, is originally from Long Island but traveled from California to attend this year’s Zoot Tri.