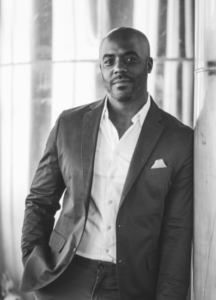 Chad Merriweather was introduced to CAF in 2014 shortly following his son Chase’s illness that resulted in amputations of all (4) of his limbs. As Chase continued to get stronger and expressed interest in running again, he was granted his first running blade through CAF. The Merriweather family attended their first San Diego Triathon Challenge (SDTC) in 2015 and gained a new level of inspiration. In the years following the Merriweather family deeply invested themselves into the CAF Family.

Chad is the Vice President of Sales at Charles Jacquin et Cie, Inc, an avid athlete having completed several marathons (as well as former collegiate athlete), a youth sports coach, and enthusiastic public speaker. Throughout his career he has taken a lead role in Multicultural/Inclusion efforts and hopes to implement several best practices to CAF. As a parent of an athlete with physical challenges, Chad will offer a unique perspective and will be an important part of CAF’s next generational efforts.